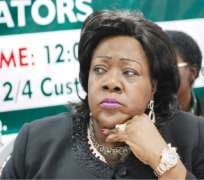 Conversely, the committee supported the sack of Alhaji Aliko Dangote as the President of the NSE in line with the subsisting court order.

The committee has also ordered NSE to forward its audited 2009 report and both Q1 and Q2 of its 2010 reports to SEC for onward transmission to the National Assembly.

Recall that Okereke-Onyuike had on June 16, 2010 tendered to the council of the NSE a letter of voluntary retirement scheduled to commence on December 15, 2010.

The committee’s resolution was contained in the report of the investigative hearing on the crisis at the NSE by the House of Representatives’ Committee on Capital Market chaired by Hon Umar Buba Jubril.

The committee in the report said: “That SEC be advised to strictly adhere to the provisions of the ISA 2007 and any other relevant laws for justice and fair play/hearing.

“That the council should look into the notice of voluntary retirement by the former DG, NSE favorably, by redressing the matter, also to allow her proceed on the terminal leave as stated in her voluntary letter of retirement.

“The letter of removal from office should be withdrawn in respect of item two above, the report said.

THEWILL gathered the has been forwarded to SEC together with the legal opinion of the legislators.

According to the lawmakers, the commission did not adhere to the provisions of the Investments and Securities Act 2007 and other relevant laws for justice and fair hearings on the issue.

The commission via an August 5th letter relieved both Okereke-Onyuike and Aliko Dangote of their positions as Director-General and President of the NSE respectively. This followed allegations of financial malpractices by Aliko Dangote against the NSE management while he chaired its council. SEC thereafter appointed Bulama Manu as Interim head of council and Emmanuel Ikhazobor as Interim administrator of the stock exchange.

The House committee which intervened in the crisis between August 9 and 10 and after hearing from SEC, Dangote and the former DG noted that SEC’s intervention ‘is tantamount to using a legal means to effect an illegal action, because the condition precedent as stipulated under sections 13, 35, 47, 48, 49, and 308 of the Investment and Securities Act 2007 and section 62 of CAMA were not met.’

The committee’s position was supported by Madukolu vs Nkemdilim (1962) 2 NLR 34 where it noted that ‘illegality is without any doubt because where a law or statute requires that something be done before a particular action can be taken, the non-compliance or failure to comply with the requirements amount to a condition precedent and shall nullify the entire proceedings’.

‘No administrative proceedings committee was set up by SEC as it is the usual procedure in weighty matters of this nature while no special investigation was ordered or made of the state of affairs of the NSE as stipulated under sections 47,48 and 49, the committee had noted.

The lawmakers argued that a space of one day cannot amount in law to sufficient compliance and or giving a person a reasonable opportunity of being heard.