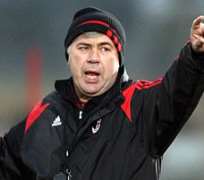 •Ancelotti
Carlo Ancelotti will sit his Chelsea squad down to review the damage of the 3-0 defeat by Sunderland upon the players' return from international duty.

Chelsea suffered its heaviest defeat at Stamford Bridge in over eight years on Sunday as Sunderland stunned the Premier League champion.

The Black Cats were full value for the victory and Ancelotti branded the performance as the worst since he took over as manager 18 months ago.

Today's international friendlies mean the Italian will have to wait to point out where his players went wrong, but he is keen to work out why the Blues performed so poorly.

“We have to have a meeting about this on Thursday when they come back from the international break to look at what happened,” Ancelotti said.

“I think this was the worst performance since I've been here. The performance was poor, but in football it can happen if you're not at your best and don't play with your best mentality.

“All the things were wrong. We didn't play how we wanted to, Sunderland showed fantastic spirit and played better.

Ancelotti has demanded a response from his side after they lost their unbeaten home record to Sunderland.

The Premier League leaders were well below par as the Black Cats recorded a fantastic 3-0 win thanks to goals from Nedum Onuoha, Asamoah Gyan and Danny Welbeck.

It was the first defeat the Blues had suffered at home this season and had not even conceded a goal at Stamford Bridge this term before Onuoha's strike.

“Everything went wrong, we didn't play well or how we wanted,” said Ancelotti. “Sunderland played with fantastic spirit, fantastic pressure, they played well.

“It was a bad day. We were not able to play our football, just 15 minutes in the first half. Everything was difficult today, it was a strange performance.

“We were in a good moment, but now we have to come back and stay focused on the next game.”