NNPC Moves To Enhance The Commercialization Of NPDC 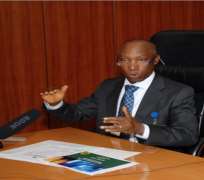 ABUJA, Nov 11, (THEWILL) - The Management of the Nigerian National Petroleum Corporation, NNPC, has stated that plans are in top gear to refocus its upstream subsidiary, the Nigeria Petroleum Development Company (NPDC), as a commercial entity with a view to transforming it from a marginal operator to a major producer to increase Federal Government's take in the Petroleum Industry.

The Group Managing Director of the Corporation, Mr. Austen Oniwon disclosed this when he received the former GMD of the NNPC, Engr. Funsho Kupolukun at the NNPC Towers, Abuja.

Mr. Oniwon noted that the NNPC was undergoing a transformation that would reposition the Corporation into a profit-driven organization, adding that to achieve the target, the portfolio of the NPDC has been increased and commendable progress is being recorded.

“The Management of the NNPC has increased the portfolio of the NPDC by extending its operations to Ogoni land and other fields. This is to enable the NPDC compete for some of the equity of Shell Petroleum Development Company as it tries to divest. The NPDC will continue to play a central role as the NNPC prepares to become profit oriented,” Engr. Oniwon opined.

He maintained that NNPC, in anticipation of the passage of the Petroleum Industry Bill currently before the National Assembly, has begun to reposition by streamlining its processes and procedures.

Mr. Oniwon said that all hands are on deck to sustain the current petroleum product stability being enjoyed by Nigerians, informing that all the three refineries in the country are presently in operation. He added that with the abundant supply of fuel across the country, some filling stations now sell premium motor spirit (petrol) below the official price of N65.00 per liter.

The NNPC helmsman said that with the recent attack on some oil facilities by militants, the Corporation was working round the clock to rebuild confidence in the minds of prospective investors by reassuring them that the amnesty programme of the Federal Government was on course.

He commended Engr. Funsho Kupolukun for solidarizing with the management of the Corporation under his watch and assured him that the management will continue to build on the legacies bequeathed to them.

Responding, Engr. Funsho Kupolukun praised Mr. Oniwon for what he described as positive developments in the oil and gas industry in just a few months of assuming office.

He said the positive developments were in the areas of pure operational improvements and broad decisive policy moves, adding that these have provided a positive platform for engagement in a manner that is most appreciated.

“There is apparent focus on the activities of the Nigeria Petroleum Development Company, NPDC, which has always been seen as the cash cow of the Corporation. We see a strong drive towards positioning the company as an operator of choice which without doubt would be an avenue for the commercialization of the corporation,” Engr. Kupolukun observed.

He averred that the prompt passage of the Local Content Act and its speedy implementation with the active support of the NNPC is very impressive, noting that "the industry is currently experiencing a wave of asset transfer and one must salute the leadership position of NNPC on the issue."