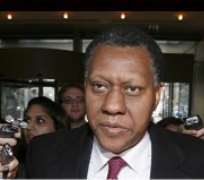 The Nigerian government, yesterday confirmed our report of Wednesday, October 12 th captioned, Suspect in Weapon Intercepted @ Apapa Wharf, Seek Refuge in Iranian Embassy. Huhuonline.com reported that the mastermind of the arsenal of weapon intercepted at the Apapa Wharf has gone into hiding and that the man identified by huhuonline.com impeccable security sources, is an Iranian business man. Corroborating our finding, the government, identified the Iranian as Mr. Azimi Adajani, and said that security operatives are still interrogating the Iranian national who applied for a Nigerian visa in Teheran on the July 14, 2010 (and has been linked with the Nigerian consignee of the arms disguised as building material). Huhuonline.com broke the story that the suspect, Mr. Azimi Adajani is taking refuge at the Iranian embassy in Abuja and cannot be arrested by Nigerian security operatives, because according to article 22 of Vienna convention on diplomatic relations, which Nigeria and Iran are signatories,

In October when Mr. Azimi Adajani, who is not licensed to deal in arms in Nigeria , took temporary residence at the Iranian Embassy in Abuja , an Iranian Embassy official confirmed to huhuonline.com that he was with them.

When asked to corroborate our findings, SSS spokeswoman,Mrs Marilyn Ogar, repudiated our correspondent, saying 'the story was a figment of our imagination'.

Speaking to news men, yesterday, the Hon. Minister of foreign affairs,Mr. Henry Odein Ajumogobia said, : 'One of the individuals (diplomat and a businessman) connected

to the shipment is an Iranian national... the Iranian ambassador has now directed that access be given to our security agencies to interrogate the  individual who is connected to the Nigerian shipper. At the appropriate time, the National Security Adviser will give details on this.'