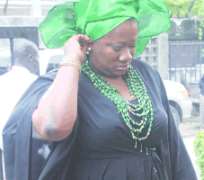 
Gele enjumpsuit!!!
You just flouted Section 234 subsection 24 of the 1990 constitution, because you are wearing a gele on a jump suit. That is highly unacceptable. Pay a fine

of N750, 000.
Up 'Rangers'
How come you got so carried away that your bra is dancing to the rhythm of the music? We are so sure that Kaffy can't even beat that bra in a dancing competition. We are short of words and so ashamed . You have been fined N1million.


One breast or two?
Honestly, you don't really need to pack up your boobs so high to get attention. This is bizarre and it reminds us so much of the groundnut pyramids of yesteryears. For committing such a grievous style infringement, you have been ordered to pay a bail


Illegal
Haven't you heard that hawking has been banned? It is well stated in the newly improved style edicts and such acts would not be allowed in public. Despite that, you still went ahead to knowingly committing this sin. Although your lawyer argued vehemently that your boobs needed sunlight, our prosecuting counsel thinks otherwise, because the recent report on the ozone layer proves otherwise. For your punishment, you will be sentenced to spend 24 months, which will run


On the wrong side
Haba! Your lawyer kept arguing that revealing your tits made you look sexier, but should you throw morals into the trash can all in the name of style? You just flouted Section 56 of the 1960 style constitution. You are guilty and sentenced to 48 months at the Kirikiri Minimum prisons with an option of


Out of control
We hate unflattering bra situations like this. Every law abiding style citizen should know by now that a woman's underwear should be kept under wraps and not flaunted for every Jonathan, Atiku, Babangida, Buhari or Gusau. We are so pissed and hereby refer you to bra remand home for a six-month orientation