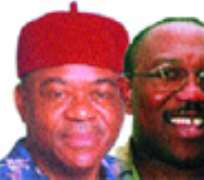 South-East Govs
When in July, members of Academic Staff Union of Universities (ASUU) in the five state universities in the southeast geopolitical zone embarked on a strike over the states governments' non-implementation of the Consolidated University Academic Salary Structure (CONUASS), approved by the Federal Government, some years ago, in their negotiation with the national body of ASUU, nobody paid attention. Not the states governments nor the parents nor the students nor other education stakeholders.

But of all the levels of university students affected, the worst-hit are the final year students doing their degree examinations and those billed to serve with the February 2011 Batch of National Youth Service Corps (NYSC).

'We plead with the governors to recognize that we don't have any other industry in the South-east. It is education', Professor Mkpa Agu Mkpa, the Vice-Chancellor, Abia State University, appealed in an interview with Saturday Sun. 'We plead with them to do anything possible to get these children back to the classrooms. Otherwise, you can't guess what they will turn out to be.'

Well, so far it is a plea that has fallen on deaf ears for, as far as the governors are concerned, it is the striking lecturers who need to be appealed to come down from their high horses of financial demands.

Speaking with reporters last week, the Imo State Governor, Chief Ikedi Ohakim, challenged striking university lecturers in the South East to come out with a workable blueprint on how to pay the salaries and allowances they are demanding as well as improve university system.

Ohakim who insisted that the lecturers are making unrealistic demands that would be impossible to meet and who wondered where to generate funds to meet up such demands, noted that in as much as the governors of the South East agree that pay-packets of university lecturers are low, they are not the only Nigerians who are poorly paid.

Turning to reporters he said: 'Tell me who is not poorly paid; is it you journalists, is it the doctors, is it lawyers, who in this country is not poorly paid. How would they then dramatize and politicize theirs as if they're the only people suffering from this?'

Along the line, other states had joined the strike, some in sympathy with their counterparts in Southeast states and others like the Rivers State, to press home their own demands. Only last week, the National Association of Nigerian Students (NANS), South-West, comprising Lagos, Ogun, Osun, Oyo, Ondo and Ekiti states expressed concern on the consequences of the strike embarked upon by unions in the state-owned tertiary institutions in Lagos and Ogun States.

One Hyacinth Onukaogu writing in the letters column of the Daily Sun, Monday, November 8, argued that the strike is political and wondered why 'only the South East is in the news and why it is only the governors of the South East that are being cajoled everyday when universities in Lagos State, Rivers State and other states are on also strike. Perhaps, the South East governors should follow the example of the governor of Rivers State who is threatening to take the striking lecturers to court.'

The latest report is that governors of the five South-East states have cried out to their kinsmen and other well-meaning Nigerians to help them prevail on the striking lecturers in their universities to return to classroom.

In October, the Southeast governors meeting with stakeholders in Enugu to resolve the industrial dispute between the states and the Academic Staff Union of Universities (ASUU) ended in a fiasco when the ASUU stormed out of the meeting, protesting the decision to disallow their national leaders from participating in the talks.

Peter Obi, Anambra State governor and Chairman of the Southeast Governors' Forum had announced to the participants that only Southeast stakeholders (Igbo) were allowed to partake in the dialogue. He asked the national leadership of ASUU and Non-Academic Staff of Universities (NASU) to leave.

The ASUU officials, led by Dr. Emma Osodeke, Chairman Strike Monitoring Committee, explained that they were invited to be part of the meeting since the issues in dispute concerned their members.

But the governors insisted that their presence was not needed since the meeting would be conducted in Igbo. But the local ASUU members, in solidarity with their national leaders, joined to walk out.

The aggrieved ASUU and NASU leaders, who later addressed reporters, condemned the decision of the governors to exclude them from the meeting. They said the development did not show that they were sincere in their efforts to resolve the three month old crisis.

The meeting which ended about 5.15 p.m could not reach any decision on the strike but the participants ended up in appointing a 10-man committee to handle the negotiation between the governors and ASUU. The committee is co-chaired by the Anglican Bishop of Enugu, Rt. Rev. Dr. Emmanuel Chukwuma and former Governor of Anambra State, Dr. Chukwuemeka Ezeife. Dr. Chukwuma urged ASUU to appreciate the efforts being made to resolve the dispute.

He said: 'We feel for ASUU and we also feel for the governors. ASUU should reason with the governors. They should understand that each state university has its autonomy. The governors have presented to us details of what they receive as monthly allocations and we have also seen what ASUU presented.

'The truth is that the states in the zone are not receiving the same allocation as their counterparts in the South-south, who have implemented the Fed Govt./ASUU 2009 agreement.'

'We deem it appropriate to give an insight into the genesis of the persisting face- off. The strike has lingered because of the insistence of striking lecturers and other non-academic staff members that they must be paid the same salary with their counterparts in the federal universities,' the Commissioners of Education in the five South-east states said in a joint-press statement issued last weekend on the continuing strike.

'This decision did not take into consideration that the Federal Government had clearly stated in the 2009 agreement it reached with the Academic Staff Union of Universities (ASUU) inter alia that 'whereas it is recognized by the negotiating teams that education is on the concurrent list and by this agreement, the Federal Government dos not intend to and shall not compel the State Governments to implement the provisions of the agreement in respect of their universities.

'We need to emphasise that the governments of the South-East states had, at one time or the other, effected an upward review of salaries of lecturers and other workers. Today, the crux of the matter is that the state governments have made it clear that their finances cannot support such salary parity in the state-owned universities. On the other hand, the striking workers insist that it is either they earn the same salary with the Federal Government universities or they will not resume classes.

'Their insistence did not take into cognizance the fact that the South-East states are hugely disadvantaged in the current revenue-sharing formula contrary to the wrong statistics being bandied about by ASUU. It is most regrettable that the striking workers chose to blackmail the various state governments by embarking on strike and creating the erroneous impression that the state governors are insensitive to the plight of the students. Nothing can be further from the truth. In fact, the reverse is the case in that governments are mindful of the resultant astronomical rise in school fees which such pay rise will portend,' the press statement said.

They said that they had separately and collectively appealed to the workers to return to their duty posts while negotiation towards amicable resolution of the impasse continued, but they bluntly refused.

But the reason the strike is becoming prolonged and may not end any time soon except fundamental issues involved are sorted out is because ASUU has, over the past months, contested the fact that the state governments involved cannot pay.

'It is curious that states like Nasarawa, Kwara, Adamawa and Ekiti, which receive lesser allocations than states of the Southeast zone, and some of which have three universities, have implemented the agreement,' Dr. Emmanuel Osodeke, Convener of the September protest held at Enugu State University of Science and Technology (ESUT) and coordinator of the Calabar chapter of ASUU, stated in an interview. 'Does it not bother you that none of the states in the zone has agreed to implement the agreement? The reason for their action is simple - they don't have their children in any of the state universities in the zone; they want the children of the poor to suffer and they want to deny them quality education.'

Saturday Sun gathers that the Southeast governors are not comfortable with Osodeke's position on the issue. Hence the subtle move by the governors to exclude him and other national officers of ASUU from the October meeting held to resolve the matter.

But the National Universities Commission (NUC) added another twist to the strike story when it issued a two-week ultimatum to the parties involved in the industrial dispute to resolve the issue amicably and reopen the universities or else be faced with indefinite closure of the universities.

'How can NUC make such statement, when they themselves have their own problems?' Ohakim asked. 'If you go to NUC you won't find data that you will work with. I sent my officials there to collect some data that will enable us improve the Imo State University and they came back disappointed.'

For now, the stand-off continues, with no one sure of what will happen next or when the issues involved will be resolved amicably to the relief and joy of everyone.