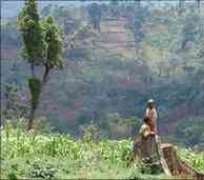 Kenya is to launch a climate exchange platform to facilitate the trading of carbon credits and help tackle climate change.

The market will be the first of its kind in Africa, enabling all African countries to sell their carbon credits.

The exchange is expected to be open for business by the middle of next year.

Carbon dioxide is one of the main gases causing climate change, scientists say, and such exchanges are one way to offset carbon emissions.

Some forecasts warn that Africa will be badly affected by climate change, even though most of the greenhouse gases which cause it are produced in the West and Asia.

The BBC's Kevin Mwachiro in Nairobi says officials hope the trade in carbon credits will open up investment in the generation of renewable energy and forestry projects.

Kenya's government estimates that its largest forest, the Mau, has the potential to earn the country close to $2bn (£1.2bn) a year over the next 15 years.

But our reporter says that before the country runs to the bank, this value would have to be certified by the United Nations Framework Convention on Climate Change.