THE SIMPSONS TO RETURN FOR 23RD SERIES 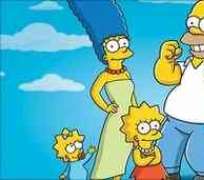 Award-winning US cartoon The Simpsons is to return for its 23rd series, Fox Television has announced.

The show, the longest-running comedy on US TV, has won a total of 27 Emmy awards since it began in 1989.

The adventures of Homer Simpson, his family and neighbours have become a firm favourite with both UK and US audiences.

The show – created by Matt Groening – is broadcast in more than 100 countries and 50 languages.

“Like many 22-year-olds, The Simpson is extremely happy remaining at home, on Fox,” said executive producer Al Jean.

The show, he continued, “hopes it doesn't have to go out into the real world for many years to come.”

The Simpsons started out in 1987 as an animated insert on Tracey Ullman's US comedy show that was subsequently developed into a half-hour programme.

Simon Cowell and Ricky Gervais are among many celebrities to have made cameo appearances on the show.

Last month it made headlines in the US for featuring a controversial title sequence designed by British graffiti artist Banksy.