EVANGELIST BOLA ARE: I SING TO PRAISE GOD, NOT MAN 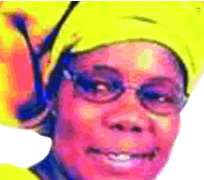 Bola Are
Foremost singer and clergy, Evangelist Bola Are has said that her mission in life is to praise God, using the Yoruba culture and language as carrier of message. The music diva who was among the few artistes who pioneered the gospel genre in Nigeria told Daily Sun recently that she only praises her Creator and not human

beings. She disclosed why she has always rejected jobs which were meant mainly to praise individuals and not God. 'In my own music, I do not sing praises about people, but I only praise God.

There are many things people can do to praise God and we can see this in the Bible.So when people call me for performances to praise them, I always tell them, I have not praised God enough, so why should evangelists be praising human beings?'

explained
Are who served as President of Gospel Musicians Association of Nigeria (GOMAN) for over five years.

Asked about some of the erring members of the association, Are said the real gospel musicians would always do well and obey the laws of the associations as well as doctrines of the gospel, while those who are not real would not. Her words: 'Those who are not called know themselves and have refused to join GOMAN. But not all gospel musicians are doing the wrong things.

There are some who sing or protect the image of God through their music' On her latest works, Are hinted that she has produced 62 albums to date and that she is set to release four in the video format through Remdel Optimum Communications soon. These include Adura Owuro(Morning Prayers), Gbongbo Idile Jesu(Root of Jesus' doctines),Oluwa Ni Oluso Aguntan Mi(The Lord is my Shepherd) and Oore Ofe(Grace).

Are also reminisced on her tenure as president of GOMAN, noting that she rallied many gospel musicians from different parts of the country to become members of the association. However, part of her challenges was how to integrate musicians from a particular segment of the North, East and South to bring gospel artistes together for unity. But some of our colleagues from the East were not cooperating. In my five and a half years of leadership, I tried as much as possible to involve the entire nation but some people felt that since I am Yoruba, I can only work for the interest of Yoruba singers and I found this rather dissappointing and upsetting.''

As president, evangelist recalled how she got the association popular, secured a bank account and how she registered the association. Her words: 'But after sometime, I decided to step aside based on God's instruction. I discovered that rivalry and disunity were setting in and that would not help the association. After I left, Rotimi Odukoya (Telemi) took over and I believe he is doing his best to address the problems of the association.'

The veteran gospel singer who hails from Ondo State also recalled how she started her career ' I was born with music and everyone in my family knew I was going to be a singer and evangelist. In fact, my birth and career had been prophesied by Apostle Babalola, so no one was surprised that I started singing as early as when I was a child. This is because God created me mainly to speak to the people through music.'