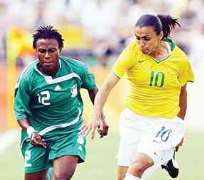 Falcons' Stella Mbachu (left)
As the Falcons prepare to engage the Lionesses of Cameroon in Thursday's first semifinal of the African Women's Championship in South Africa, TomTom, the Official Candy of the Nigerian national football teams, has appealed to Nigerians to rally behind the team.

Senior Brand Manager, Medicated Candies, Cadbury Nigeria Plc, Mrs. Bimbo Alabi, said the Falcons had shown great determination in regaining Nigeria's lost glory in the continental championship by winning all their three group games, including the fixture against their hostesses, the Banyana Banyana.

'We should encourage the Falcons with our support as they meet yet another strong opposition in the Cameroonian girls,' Alabi said. 'But the Falcons have convinced us all that they are up to the task.'