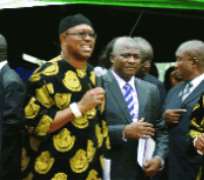 The state was fully charged with unusual activities taking place in every noticeable corner in the morning of 15th October. Shops around the state were closed and school children were seen milling around in groups; the Nigerian flags in hand, it was obvious that the day is a special day in the state. Indeed it was the day the president of the Federal Republic of Nigeria was billed to visit the state and commission projects done by the state government led by Mr. Peter Obi.

It was not until about 11am that the presidential helicopter touched down at the Gabros International Stadium, Nnewi with the president accompanied by his host, Mr. Peter Obi emerging from the bowel of the 'big bird' of an aircraft clad in same attires as his host; an ishiagu dress, royal beads around his neck and wrist, a black chieftaincy cap, President Jonathan raised the elephant tusk he carried in his right hand in greeting at the large assemblage of heads awaiting his arrival, charging the atmosphere which immediately signified the completion of the first phase of the day's event; Mr. President has come.

From Innoson Vehicle Manufacturing (IVM) plant in Nnewi, the president moved to the South East Regional Laboratory of the NAFDAC, while commissioning roads projects of the Obi administration as he traveled. Mr. President also commissioned the Anambra State University Teaching Hospital, a twin secretariat complex and a gigantic State Emergency Management Agency (SEMA) complex. The last in the commissioning list was the JUHEL Drug factory. The drug infusion and manufacturing company is said to be the third in Africa and the largest of them all. All these sights; only an infinitesimal ratio of the capabilities of the Anambra state government and people left Mr. President with the impression that he has seen much.

Mr. President was obviously happy from his look and voice that he came, it could also be deduced from his speech that he was delighted about all that he saw, and it was time to give confirmation. The confirmation however came at the reception organized for him at the Anambra governor's lodge where he was to speak to the people of the state.

'I have mentioned it before, that in terms of land mass, Anambra state may rank as the smallest in the country, but in brain density Anambra is the highest.' With these words, President Jonathan confirmed all that he saw in the state. Besides the numerous projects initiated by the Peter Obi administration, most of which he did not visit out of time constraint, the president was visibly impressed with the drug and vehicle manufacturing company sited by private individuals in the state. While commending Governor Peter Obi for the projects he did in the state, the president noted that the distribution of buses to schools in the state and also donation of 50 security vehicles are giant strides.

According to him, Obi's attention in the education centre will herald a radical change that will help the Nigerian child to compete favourably with his counterparts around the world. He also described education as the key to the future, while stating his government's efforts to improve education.

Jonathan while reacting to the donation of security vehicles also thanked the governor saying that with contributions of these magnitude, the menace of kidnapping would be totally phased out in the country.

Earlier in his address, Governor Obi had assured the president that his government is committed to live up to the dream of achieving the Millennium Development Goal by the year 2015. He highlighted that in a recent world habitat expo in China , UN HABITAT showcased Onitsha as one of the five fastest growing cities in the world. He assured that if given the right attention by the federal government, Onitsha can grow up to become a major economic zone for Nigeria .

Reacting to most of the issue raised by Obi, President Goodluck Jonathan promised among other things to assist the good work of the state government. The Zik Mausoleum he promised to build, the second Niger bridge he declared a top priority of his government, security he pledged can not afford to be compromised anywhere in the country, and that sponsors would be adequately dealt with. Most importantly is the promise to return to the state the sum of N3billion utilized on federal infrastructure around the state. Anambra he also added would attain the position of an oil producing state as the federal government intends to tap the vast mineral resources that abound in the it.

'I commend your governor for all the projects he has been able to achieve with the lean resources available to him.' Jonathan told Anambra people, and with these words, he bid Anambra good bye at 5:30pm.