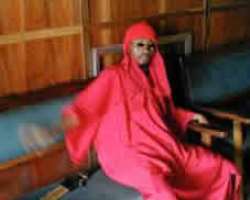 Bakassi boy
What could have turned into bloody demonstrations were averted by the police in Aba, the commercial hub of Abia State following the alleged killing yesterday morning, of a trader, Mr. Sunday Ani, a.k.a Wowo by the notorious Abia State Vigilante Service popularly known as Bakassi Boys.

As early as 8.00am, traders at the Ehere Modern Market in Obingwa Local Government Area had barricaded the Aba end of the Aba-Ikot Ekpene highway and prevented vehicles from entering Aba from that axis. They later took to the streets, chanting war songs in protest against the killing of one of their members inside the market allegedly by one of the Bakassi Boys said to have been stationed in the market by the state government.

Daily Sun gathered that early yesterday morning, some Bakassi Boys who had their offices inside Ehere Market had come out, as it had been their daily routine to extort money from the traders. They were said to have accosted a lorry that had just brought in some logs of wood from Akwa Ibom into the market and demanded N2,000 from the driver.

When the driver queried why he should part with the amount that morning, he was said to have been told by the Bakassi Boys that it was the routine that any vehicle which brings goods to the market normally 'settles' the security outfit. It was also gathered that as the arguments were still going on, one of the Bakassi Boys whose name was simply given as Solomon, allegedly pulled his gun, shot and killed Ani who was said to be returning from morning prayers and was coming to open his shop for the day's business.

Ani, 33, who hailed from Akpugo in Nkanu Local Government of Enugu state was said to have concluded arrangements for his wedding this December before he met the untimely death. Speaking to Daily Sun over the incident, the Chairman of Forestry Association of Nigeria, Ehere Branch, Mr. Jeremiah Iheanacho bemoaned the activities of the Bakassi Boys querying the rationale behind their being stationed in the market.

'Each time we asked, they (Bakassi Boys) would always tell us they were stationed at the market by Abia State government and the purpose of why they are there is what nobody knows.'

Immediately the news of the incident got to the new Area Commander, Aba Area Command of the Nigeria Police, Alhaji Rabiu Dayi, he rushed to the market to sympathize with and pacify the traders. Describing the incident as unfortunate, Dayi said he visited the scene to ensure the situation did not get out of hand and promised that something would be done to prevent future occurrence.

Meanwhile, Governor Theodore Orji has called on residents of Aba to remain calm while the state government wades into the matter. Speaking through his special adviser on electronic media, Mr. Ugochukwu Emezue, Orji said he was pained the more that the incident happened when residents of the city were yet recovering from the menace of kidnappers and said his government would take all necessary steps to ensure that justice was done in the matter.

He said government would set up a probe into the incident and that anybody found to have been involved in the killing, would face the law.