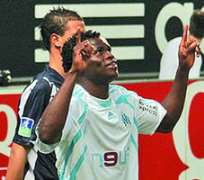 Taye
The die is cast for the mother of all contract talks in France, as the end of month deadline has finally reached in the decision time over Taye Ismaila Taiwo's future at Olympique Marseille.

The deadline comes sequel to an early declaration by Taiwo's agent, who issued OM's management an ultimatum to renew the contract of the left-wing-back on Oct. 31 or risk losing him to another club.

With D-Day now over, Taiwo has not yet seen the shadow of a proposed contract extension, although the top brass at Marseille were expected to respond by meeting the player's representatives last Friday afternoon.

Since his arrival in June 2005, Taiwo has played nearly 243 games with the OM, during which he has tied down impressive statistics that have already made him enter the club's folklore as an assistant captain of the side.

However, the story between Marseille and Taiwo could end dramatically in June, following the club's reluctance to extend the defender's contract and put better trappings into his remuneration. Despite Taiwo being the oldest player at Marseille, he is poorly paid compared to other stars in the team, who have left him behind as the 13th highest paid player in the squad, with a yearly salary of â‚¬1.6 million.

Argentine left-wing-back, Gabriel Heinze pockets â‚¬4.5 million every year, and Taiwo's agents says Marseille must now break the bank to keep the Super Eagles defender, who has already played 13 matches this season in all competitions.

Warning bells are ringing for Marseille, though, with additional reports indicating that, if both parties fail to agree on a new contract, it would be to the benefit of Chelsea, Juventus, Sevilla, Bayern Munich and Inter Milan, who have all indicated interest in signing the former Lobi Stars of Makurdi and ex-Gabros International of Nnewi bomber for free next season.