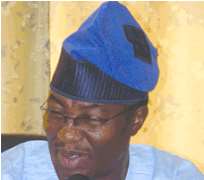 Gov. Gbenga
Allies of President Goodluck Jonathan swiftly moved in to fill the vacuum expected to arise from the resignation of Kwara State Governor, Bukola Saraki as chairman of The Nigeria Governors' Forum (NGF).

The president's allies replaced Saraki, who is one of the contenders for the presidential ticket of the Peoples Democratic Party (PDP), with Ogun State Governor, Otunba Gbenga Daniel, but the move, which is believed to be part of the strategies of the Jonathan camp to clinch the ticket, has sparked crisis.

No fewer than two non-PDP governors have kicked against the purported election of Daniel, just as Saraki, who had called a meeting for Wednesday, insisted he remained leader of the all- powerful NGF.

Also the National Secretariat of the Nigeria Governors' Forum, has denounced the purported election, declaring that the forum was a non-partisan organisation whose membership transcended the PDP Governors' Forum, adding that no election could take place without other members of the forum present.

In what could be described as a civilian coup at the weekend, governors, who are in the forefront of campaign for Goodluck Jonathan 2011, led by Governor Gabriel Suswam of Benue State, met in Abuja after which they announced the election of Governor Daniel as the new chairman.

While announcing the change of guard, Governor Suswam had said that since Governor Saraki was a presidential aspirant on the platform of the PDP, he was no longer in a position to lead the Governors Forum. He added that it was in this wise that the governors met and elected Governor Gbenga Daniel as the new Chairman of the NGF.

According to Mr. Okauru; 'We wish to inform the public that the NGF is a non-partisan forum for all elected governors of the Federal Republic of Nigeria regardless of party affiliation.' The Director-General of the NGF further said a meeting of the forum had been scheduled to cover amongst other things, detailed brief by the outgoing chairman, Governor Bukola Saraki, adding that the outgoing chairman's briefs would be followed by an election of a new leadership, saying the outcome of the election would be duly communicated to the public.

Daily Sun gathered that governors, who are supporting the ambition of President Goodluck Jonathan, who gathered in Abuja for the fund raising ceremony of Goodluck/Sambo Campaign Organisation last Friday night, hurriedly met to pull the rug off the feet of Governor Saraki as Chairman of Nigeria Governors Forum in order not to allow him use the forum to his advantage in any way possible.

It was further gathered that it was agreed by the PDP governors that met at the forum that the best placed governor to announce the change of guard was Governor Suswam also from the North Central geo-political zone and believed to be a close friend of Governor Saraki but for recent political development that had seen the duo going in an opposite direction, owing to political ambition that is not premised on ideological belief.

A source at the Nigeria Governors Forum Secretariat told Daily Sun on condition of anonymity that it was a takeover that was hurriedly planned thus did not weigh a lot of possible backlashes that may boomerang against the planners who are being used as cannon fodders.