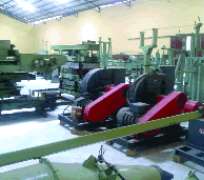 Some of the new machines
When he signed a Memorandum of Understanding (MoU) with the Olusegun Obasanjo government in 2004, Rwandan businessman, Tribert Rujugiro, did so with the surefootedness drawn from the success stories he had recorded in such places as South Africa, Europe, Uganda, DR Congo and his home country, Rwanda. It is this same success story, he says, he intends to repeat in Africa's most populous country, Nigeria. Driven by the vision to provide local content not just in his native Rwanda but in the wider context of Africa, he said political emancipation of Africa, for which millions of men, women and youths died, would remain meaningless unless Africans are primed to take the driver's seat in the struggle for economic emancipation.

To this end, the industrialist with apparent Pan-African tendency is counted as one of the business leaders providing templates for the younger generations in Africa to rise and break ceilings and indeed, strive to be brand leaders in key economic sectors across the continent. It was not for nothing that Rujugiro was at a time one of the close advisors of President Paul Kegame of Rwanda with the latter leaning on the billionaire businessman to throw in his wealth of experience in building a country styled as the Switzerland of Africa.

Seven years down the road in Nigeria, the philosophy that led Rujugiro to set up such companies as the Rwandan Investment Group (RIG) in Rwanda, Mastermind in South Africa and LeafTobacco and Commodities Nigeria (LTCN) is being put to test by harsh economic realities that have forced not a few manufacturers out of business.

Safe haven
The statistic is scary even for seasoned industrialists familiar with the unpleasant curves any Third World economy can throw up. At the last count in July last year, well over 820 manufacturing companies had shut down their operations in Nigeria, as they buckle at the knees under an economic climate that has particularly left the industrial sector groaning. According to the Manufacturers Association of Nigeria (MAN), which gave the figure, the over 820 manufacturing companies closed shop between 2000 and 2008, even as uncertainties become the fate of others whose operations are diminishing due to high production costs.

Speaking at its annual general meeting (AGM), with the theme, Sustaining Nigeria's Manufacturing Sector in the Face of the Current Global Economic Recession, the president of the association, Alhaji Bashir Borodo, had said the closure of production by many industries had become worrisome to manufacturers even as some companies in the country were relocating to Ghana, in the face of unfavourable economic climate.

That many companies have divested in Nigerian economy is no longer news. It was gathered that in 1999, for example, manufacturing sector accounted for nothing less than five per cent of the Gross Domestic Product (GDP).  This, however, shrunk to 4.9 per cent in 2000. As a result of inadequate infrastructure and high cost of production, the manufacturing capacity utilisation has remained on the downward spiral.

About two years ago, Dunlop Nigeria Plc., the only surviving tyre manufacturing company in Nigeria then, shut down its plants, laid off hundreds of its workers and put some on half pay. Dunlop Nigeria Plc and Michelin have since relocated to Ghana. Patterson Zochonis (PZ) is also planning to relocate to Ghana, even as Cadbury Nigeria Plc, Unilever and the International Institute of Tropical Agriculture (IITA) sacked a sizeable number of their workers over reported high cost of production and decaying infrastructure.

Reports from Ghana have it that major investment drive to lure companies from Nigeria involves a 'mouth-watering' package, which company operators have found to be irresistibly attractive. It includes the donation of free piece of land to companies willing to migrate to any part of Ghana, a 15-year tax holiday as well as other policy incentives that are not readily available in Nigeria.

Already, several blue-chip companies are said to be scouting major cities in Ghana, in response to the aggressive onslaught. Dunlop Nigeria Plc and Unilever Nigeria Plc are said to have finished building manufacturing plants in Ghana. Dunlop last year announced the closure of its manufacturing activities in Nigeria, based on the excuse of changing from core tyre manufacturing to pure sales and distribution. Shortly after this announcement, the entire plant and premises of the company located on Oba Akran Avenue, in Ikeja Industrial area of Lagos, were offered for sale through several newspaper advertisements. Its new factory in Ghana is said to be the proposed base of its radial tyre importation activities into Nigeria.

Dunlop is not alone in the relocation sprint. Reports have it that while some leading manufacturers in Nigeria are still on the verge of completing the installation of their plants in Ghana, others have already started operations from there. One of them is OK Foods Group, a leading food and plastic manufacturer. Its former manufacturing plant located along the Apapa-Oshodi expressway, has since been deserted. It is one of the many companies that have quickly relocated to Ghana to take advantage of the liberal investment incentives the Ghanaian authorities are throwing at them.

Inside Rujugiro's factory
There is hardly any manufacturer in Nigeria that has not had sleepless nights over challenges in the industrial sector. Pointing at the real bane of the manufacturing sector, the Ikeja branch of the MAN said private power generation accounted for 30 per cent of the cost of production and that the inadequacy of supply is mainly responsible for 25. 24 per cent of poor capacity utilisation. If old names, like Dunlop, Michelin and OK Foods are voting with their feet, it is hardly possible for new entrants, like LeafTobacco and Commodities not to feel the pinch.

When Saturday Sun visited the facility of LeafTobacco, in Gbakura, Kaduna State, it was learnt that the company has had to deal with the same problems faced by every manufacturing outfit across the country. However, they have no plans to relocate to Ghana. According to Mr. S. Folarin, head of the company's Primary Manufacturing Department (PMD), LeafTobacco generates its own power, provides its own water and does everything required to keep its machines running as well as keep its workforce - 90 per cent of them Nigerians - happy.

In the week that this reporter visited, the company had just taken delivery of new sets of machinery with which it plans to further expand its production capacity. Folarin said that while some manufacturers are transplanting their operations, with the idea of producing in Ghana only to thereafter ship their products to Nigeria, the reverse is the case for LeafTobacco. The company is increasing its output in Nigeria, with the aim of exporting to neighbouring African countries.

Having operated in difficult terrains, like Uganda and DR Congo, Folarin said it is a lot easier for the company to surmount all odds in Nigeria. It was gathered, however, that the trickiest challenge LTCN is facing in Nigeria is not so much the difficult production factors, as the supply of false information, allegedly by competitors, 'to any authority who could act to ban Rujugiro from the Nigerian markets. LTCN's management, in Leaf Tobacco & Commodities Nigeria (LTCN) has spent time fighting these malicious indirect attacks originating from false information in the press, such as recent articles vilifying Rujugiro.

In one of them, Advertising Practitioners Council of Nigeria claimed that YES cigarettes (manufactured in Nigeria by LTCN) did not have the necessary health labels. This is a very false allegation. Another example: when YES brand was launched in Nigeria, some people were sent to destroy the point of sales; they attacked hawkers' tables.

On the existence of LTCN and regarding the concession given to it by the Federal Government, it was gathered that LeafTobacco signed an MOU with the Nigerian government in 2004 for a three-year duty concession on imported cigarettes while the factory was in construction. Folarin said that contrary to reports, a building of 6700m? was built along the Abuja- Kaduna expressway in the first three years. He said there are more than 70 people employed at the factory; the production lines are in place and a leaf growing project is under study, due to commence soon. In the distribution company, he said there are more than 200 full-time staff.

On the allegation that LTCN is engaged in more importation and less production, the company explained that it was indeed, its sister company that shipped over 55 containers to Lome and Cotonou, among other West African ports, for the mentioned period. However, all were destined to other consumer markets, where the brand, YES, has been distributed for the past decade.

'To further illustrate the misinformation provided; out of the five containers listed from random sampling, three containers we found out are originating from Vietnam, where our group has never had any activity nor production unit. These are, without any doubt, part of the growing illicit and counterfeits trade our group has been actively fighting against in the region for the past few years. Our group has seized and destroyed numerous containers in the region, with the cooperation of regional customs authorities. Our group is fully cooperating with relevant authorities in the West African region and elsewhere to stop this illicit trade of counterfeit products originating from the Middle East and Asia. In addition to trademark infringement, these products are of poor quality and often do not comply with local health regulations. The remaining two containers, we found out, were destined for Niger Republic and not Nigeria.

'All containers destined for Nigeria, have been shipped and delivered to Nigerian ports, namely Apapa. And all the necessary permits and licenses had been delivered by the relevant authorities. With a concession and factory in place, LTCN has always imported all its products legally and contrary to the illegal trade would not derive any benefit in smuggling cigarettes into the country. In addition, smuggling is against the group's ethics and in breach of its commitments towards the local community.'

Folarin said that if Tribert Rujugiro did not have a track record, he would not have been chosen to be part of the process of rebuilding Rwanda after the war. Rujugiro was the driving force of a new initiative called Rwandan Investment Group (RIG), a private investment company created by some 43 local investors. Created in September 2006 and possibly modelled after Nigeria's Trans-national Corporation Plc (Transcorp), RIG headed by Rujugiro, was investing in extraction of methane gas in Lake Kivu, in the western part of Rwanda, silk and cement production, maintenance of Kigali industrial park and peat extraction. The concession carried a lower rate of purchase of the supplied electricity, and carries no financial support or facility, apart from a guaranteed purchase and payment of supplied power.

At this very moment, out of the five concessions given by the government, RIG is the only one that has started work, and is already extracting the gas. The Rwandan government will benefit majorly from this concession, as the power will be supplied at almost 60 per cent of the current cost paid by the government.