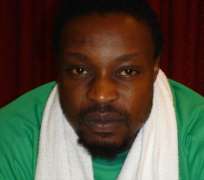 Jagajaga crooner, Eedris Abdulkareem cannot forget in a hurry his experience with armed robbers who robbed him at gun point along Limit road, GRA external in Benin. Buzz scooped that he was robbed while coming from Benin. Eedris was in the company of Maleke a popular Benin comedian and immediately they disclosed their identities to the robbers, they set them free and returned their phones and car keys.

They only took the sum of two hundred thousand naira, which Eedris had with him. According to sources, one of the robbers even told them that he has a brother who is musically talented, he ordered them to write their phone numbers on a paper and that his brother would contact them so he could feature in Eedris' album. Abdulkareem who shot into limelight with his group over a decade ago went out of circulation after his brawl with Nigerian breweries. He is just bouncing back to the limelight again with 'Calabar girl' his hit track in his new album 'Unfinished business.'