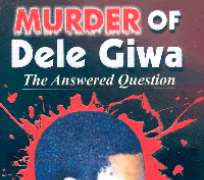 The bomb boomed exactly 24 years ago, and the reverberation still sounds across time and space, because the cataclysm left behind a number of unanswered questions. Whodunit? Since October 19, 1986, the question has been asked. And the answer has been blowing in the wind since then.

The book is dedicated rather fittingly to the memory of five slain journalists, as well as to human rights activist, lawyer, and friend of journalists - Chief Gani Fawehinmi (SAN), also of blessed memory. The journalists are Godwin Agbroko, Omololu Falobi, Abayomi Ogundeji, Bayo Ohu, and Edo Ugbagwu. This book is in six chapters. It also has a preface, a prologue, and an epilogue.

In the preface, the author reveals his motive for writing. Col. Kunle Togun, who was Deputy Director, State Security Service (SSS) at the time Dele Giwa was killed, had written a book with the title, Dele Giwa: The Unanswered Question. Togun was one of the persons fingered for the dastardly murder, and he had written the book to tell his own side of the story.

But hear Akinnola: 'In deconstructing Col. Togun's disingenuous disinformation and misinformation… it is necessary to lay the facts bare and put the issues in proper perspective. … That was what necessitated the writing of this book because many of Col. Togun's convoluted conjectures perhaps only exist in his fecund imagination, which was meant to obfuscate issues by using his intelligence training to sell a dummy and parry recondite questions that suggested that the security apparatchik of General Ibrahim Babangida was responsible for the death by parcel bomb of Dele Giwa.'

When Akinnola says the question about Giwa's death has been answered, is he saying Gen. Ibrahim Badamosi Babangida (IBB) did it? He clarifies his position in the preface thus: 'Just like serial political murders were perpetrated under Gen. Sani Abacha as exposed during the Oputa panel, most of which were done on behalf of the late Head of State without his knowledge, there are strong possibilities that the murder of Dele Giwa may have been done without the express approval or knowledge of General Babangida. By the principle of vicarious liability, he cannot exculpate himself if he did not take any punitive measures against the suspected security chiefs.'

In the prologue, a column entitled Death of Destiny, written by Dele Giwa, is reproduced. And how uncannily prescient the piece of writing turns out to be. There, he postulated on life and death, and submitted: 'Good men, men of purpose who are true heroes, do get cut down in midstream on their way to achieving greatness.' How prophetic this turned out to be.

In Chapter Two, with the title, Parallax Snaps, the author takes his readers down memory lane. Snippets, and sometimes, large chunks, are taken from Giwa's many articles, which today remain timeless and evergreen. The chapter takes you back in time, and reproduces the essential Dele Giwa for those who knew and read him, and also introduces him to the younger generation.

Chapter Three bears the title, This Must Be from the President. Are those words familiar? Yes, they came straight from Giwa's mouth as he received the parcel that bore the nation's Coat of Arms, delivered to him that fateful October 19, 1986. He opened the parcel, and as they say, the rest is history. Akinnola paints a graphic picture of events that transpired after the bomb blasted Giwa to smithereens, which eventually culminated in his death in the hospital. The statements written to the police by Funmi, Giwa's wife, his son, Billy, and Kayode Soyinka, the London Bureau Chief of Newswatch, who were in the house when the event occurred, are also in this chapter.

Before Chapter Four, you get vintage pictures of Dele Giwa's life and times, as well as those of his funeral. And in the chapter, the reader is let into the 38 cases and 214 court appearances made by Fawehinmi, in the aftermath of Giwa's death. A good resource material for both journalists and lawyers, surely.

Chapter Five is on the Oputa panel, and the revelation that came therefrom. The chapter also contains questions Akilu and Togun, the security chiefs, refused to answer, the Gloria Okon angle, and testimonies by Giwa's colleagues at Newswatch. There is also a transcript of an unpublished encounter between Col. Togun and journalists on October 27, 1986. It is quite revealing.

Why I rejected Babangida's letter. That is the title of the last chapter, which is a reproduction of an interview Funmi Giwa had with Africa Today in 2001. Here, you will get more chilling details of that bloody October 1986 day. The epilogue is where the heart of the matter lies. Here, the author says from the findings of the Oputa panel, the questions Col. Togun claims were unanswered, have really been answered. And he concluded: 'There is no amount of disinformation and deliberate distortion of facts that can obfuscate issues in this matter.'

Akinnola has a good resource material in this book. The language is breezy, accessible, and makes the book a pleasant read. A few proof-reading errors dot the publication here and there, but they do not detract from the overall quality, at least not significantly. Readers will surely enjoy this book. It has added to the already rich corpus on Dele Giwa, and on a day like this, the slain journalist will be proud in his grave that his compatriots have kept the fire burning.

Let's end with an adaptation of the wordings of the Negro spiritual about John Brown's body: 'Dele Giwa's body lies a-mouldering in the sands. But his soul goes marching on.'