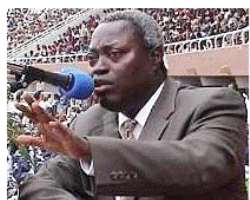 Against the backdrop of barrage of news reports over the recent marriage of the senior pastor of Deeper Life Ministry, William F. Kumuyi, the ministry has decided to set the record straight. A statement released by Pastor L.P. Nnadozie, the church secretary , said,

Pastor William F. Kumuyi, General Superintendent of the Deeper Christian Life Ministry, sparked off joy and spontaneous happiness among members of the church when he got married recently, in London.

His new wife is former Ms. Esther Folashade Aduke Blaize. She is the Administrator of the Deeper Life Bible Church, London. Esther, 65, was never married before, but had committed her life to the service of the Lord.

The solemnization ceremony of the couple's Christian marriage took place in London, on Wednesday, October 13, 2010.

Recall that Pastor Kumuyi had lost his first wife, Biodun, in April last year. The death of the woman affectionately called 'mummy' or 'mama', by members of the church, became a cause for concern for leaders in the church as she was almost inseparable from her husband.

The church leaders were so concerned that the Pastor must not remain lonely, that they led a delegation to encourage him to begin praying to God to give him another wife.

The leaders, according to a statement signed by Pastor L.P. Nnadozie, Church Secretary, also began praying for their pastor to get another partner.

'Although initially reluctant, Pastor Kumuyi later prayed and testified to the leaders that God had answered their prayers. This is what culminated in the marriage ceremony in London .

'The wife of the General Superintendent is the National and International Woman Coordinator of the church, a role that cannot be filled by any other woman'.

The solemnization ceremony is said to have been attended by leaders and members of the church in different parts of Europe , and representatives from some states of the federation, and the Lagos headquarters.

Key leaders of the church in all parts of Nigeria , who could not attend the wedding ceremony, burst into spontaneous applause as they watched the video recording of the event in Deeper Life Churches across the nation on Tuesday.

Dressed in a modest business suit, Pastor Kumuyi watched as his bride, Esther, resplendent in a pink and purple skirt suit, took the vow of marriage while guests at the wedding were later entertained at the Crowne Plaza Hotel in London.