EFCC Advisory List: The Innocent Needs Not Be Jittery - EFCC 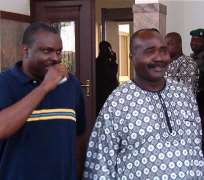 The EFCC a few weeks ago made its intention known to work closely with political parties to ensure that corrupt persons are banned from holding public office.

Some of those named in the list are Mr. Lucky Igbinedion, Chief James Ibori, Honourable Ndudi Elumelu, Senator Nicholas Ugbane, Rev. Jolly Nyame, and Ayo Fayose amongst others.

The commission in its statement today said it wanted to clarify some misleading arguments from a section of the public in order to set the records straight.

The statement signed by its spokesman, Mr. Femi Babafemi reads: “The attention of the Economic and Financial Crimes Commission, EFCC has been drawn to a barrage of mixed reactions following media reports on a list of high profile cases being prosecuted by the anti-graft agency.

“The Commission has decided to clarify some of the issues raised in the publications in the interest of members of the public who might be misled by the selfish arguments of some hired commentators who are desperate to stifle the nation’s anti-graft war.For the avoidance of doubt, the EFCC has repeatedly emphasized that it does not have the power to ban or disqualify any person from contesting for a public office and does not intend to embark on actions outside its responsibility. The Commission under its present leadership has been working and remains fully committed to working strictly within the rule of law.

“It is however surprising that the mere publication of a list of cases being prosecuted in courts by newspapers has generated so much reactions from those who are yet to discharge their burden of corruption charges as well as their fans and agents alike.

“It is more disturbing given the fact that the list that has elicited the flurry of reactions has been on the commission’s website since 2008 and all the facts therein have been in the public domain since the trial of the accused persons began.

“The list is neither a covert or overt strategy, intention, ploy nor agenda of the EFCC to arrogate to itself the power of a law court. Thus, it is patently assumptive and speculative of anyone or any group to accuse the Commission of using its power to stop aspirants. The Commission never states or pretends that it has any power to stop aspirants. What the list simply represents is a public disclosure of the gamut of its prosecutorial efforts in the war against corrupt practices, an information that has since remained in the public domain for several months.

“It is therefore obvious that most of the reactions and attack on the Commission were borne out of the desperate bid by those who have deliberately stalled their trials in the courts to buy time through various frivolous applications so that they can seize the opportunity of another election to return to public office and once again enjoy immunity.

“The truth of the matter is that, those who have no quarrel with the lion have no need to fear its fatal claws! The innocent needs not be jittery. The EFCC is doing its job and should be appreciated for doing so creditably.

“It is rather unfortunate that at a time when all efforts should be geared towards raising the bar against corruption in Nigeria in a way that will positively affect the global rating of the country, some persons can still be found to be taking sides with the cankerworm that has given our nation so much negative publicity,” the statement added.