No man can stop my passion for acting –Nollywood sensation, Esther Audu 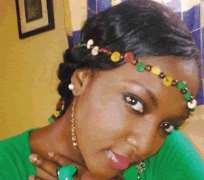 Abuja-based Esther Audu, is among the new crop of Nollywood thespians currently igniting the Federal Capital Territory (FCT), with their acting intrepidity and poise. She's not only passionate about acting, but has also set a target for herself and burgeoning career in the make believe world.

With over a dozen movies and a couple of sizzling soaps to her credit, including the wave making, David's Fall, the Kogi State born entertainer, has not stopped dazzling fans with her charm and diction. Constantly striving for excellence in her very promising career, Miss Audu, a Business Management graduate of the University of Jos, Plateau State, is optimistic, she's destined for the top in tinsel town.

Currently lensing on set with the cast and crew of David's Fall, in the seat of power, Audu, is of the view that the production would further shore up her fledging career, thus catapulting her to the next level.

In this riveting encounter with AZUH AMATUS, the soft-spoken 24 year-old daughter of a retired Soldier spoke glowingly on several professional and private issues, with more emphasis on her enthusiasm for acting and being a proud member of Nollywood.

What has been happening to your career?

Nothing much, I've been quite busy in Abuja working on the set of my new project, a fascinating soap, entitled; David's Fall. It currently shows on AIT every Sunday, Monday and Tuesday, I'm playing the role of Hauwa.

Tell us more about your background and family?

Well, as you already know, my name is Esther Audu, I'm from Igala, Kogi State. I'm a Christian and a believer, from a family of six. In fact, I am the last girl; we have just a boy. I'm a graduate of the University of Jos, where I studied Business Management. I live in Abuja with my parents and siblings. I love cooking, traveling, listening to music and watching movies.

I'm 24, and was born on March 22, I'm an introvert and a shy person too, some people also say I'm quiet, I don't know about that. I only know I don't talk too much. I believe in hard work and love people who are focused and determined. I believe that if you work hard, you would definitely achieve your heart desires, though, it might take time, but you'd definitely achieve it. I believe in God and trust in Him so much. I also seek his direction in whatever I do.

How was growing up and where did you grow up?

Growing up was fun, I was born in Lagos, Ikeja Cantonment to be precise, and my dad was a military man, a retired Army officer. We left Lagos for Abuja in 2002, I had part of my primary and secondary schools in Abuja, and so growing up in Abuja was fun and memorable.
It was fun growing up with my parents in the midst of my other siblings. I thank God and feel very happy to have come out from that wonderful family. Mr. and Mrs. James Audu are the best parents in the world. If I reincarnate, I would still love to come back to them. Nobody would ever give to me the kind of good training they impacted on me. They made me what I am today.

Your sojourn into Nollywood, when and how did it begin?

It actually started when I was in secondary school; I wanted to be a newscaster then. I was also in the Drama and Literary group in secondary school and we were doing stage dramas and other stuffs. However, the whole thing changed in 1996, when I was among those selected to represent Nigeria, in Ghana, at Kidafest, which was when I started building the passion for acting. After that experience, my attention shifted from news casting to acting and has since remained like that. Immediately after my secondary school, I joined a church drama group called Redeemed at his Majesty parish, in Abuja. Through that group I got a lead movie role courtesy of Alex Mouth, it was a Christian movie in 2003. Mouth actually encouraged and helped groomed my professional acting career. After that production, he called me for another audition in Jos, in 2004. The movie was entitled: Ungodly Romance. I later did Sins of Rachael with them in Jos, these earliest movies and
several others helped to launch my career fully into Nollywood.

Even, while an undergraduate, I was also going for auditions and partaking in one or two movies. I also turned down jobs that were coming in between my studies then. Obi Madubogwu, later invited me to Lagos for an audition which I did, but ended up not getting the role. One of the judges, Norbert Ajagu, saw me and liked my style at the audition. He later called me for a movie entitled: Fatal Mistake, where I played a sub lead. It was fun working on that set with some big names. After that, I have done over a dozen movies currently; I also worked with Franca Brown and others on the set of a soap, a couple of years ago.

The working title was Black Sheep and I played Doris, a young and struggling girl, who was constantly battling the many vicissitudes of life, in her quest for true love.

In fact, I've never worked with a female director before, until my part and that of Franca Brown crossed. And working with her was fun, rewarding and totally different. She's a very good director and brings out the best in you. Our Lives, was my first soap, we shot in Jos and Kaduna, respectively.

We would like you to share some of the major challenges you have encountered on the job with us?

The challenges are there, but we thank God for giving us the courage to surmount them. But it hurts also that most filmmakers do not like giving up and coming stars, the opportunity to grow and excel. They don't believe in you because they have not seen much of you. They like repeating old faces. I want them to give new faces the opportunity to display their immense talents.

On the issue of sexual harassment, it has never happened to me. As a lady, men will definitely pass glances at you and even woo you, which is normal, I do not see that as sexual harassment. If you are interested in his advances, you say yes and if you are not, you say no, nobody is going to force you. If you feel that the only way I can work with you is by dating you, you can as well keep your script. I'm not in a hurry or in a rush to get to the top. I know that I will definitely get there, because this is what I want to do for the rest of my life. For me, its not really right to mix pleasure with work.

Have you ever been owed production fees, by filmmakers?

No, I always get paid my fees as at when due.

But why did you settle for Business Administration, instead of Theatre Arts?

For me, acting is a calling and something I've always loved to do, while Business Management for me, is a profession. As a business manager, you manage a lot of things, and management is needed in every facet of our daily lives. I will still go back to school to have a degree in Theatre Arts, some day.

What would you say you like most about being an actress in Nollywood?

The fun of Nollywood is unrivaled, I feel so happy whenever I move from one location to another facing the cameras and meeting people. Mind you, I like traveling.

Who's that Nollywood star that you look forward to working with, but has not been opportune to do so?

Sincerely, I look forward to working with Genevieve Nnaji. I admire her as a lady and an accomplished actress. People say I have some striking resemblance with her. Some even ask me if we are related. But on the foreign scene, I admire Angelina Jolie so much.

As a single lady, what kind of man would appeal to you?

Sincerely, my ideal man, first and foremost, must have the fear of God, be focused, hard working, comfortable, dark in complexion, and tall. And please, don't ask me if I'm currently seeing somebody because I do not want to talk about that on the pages of newspapers.

Do you believe in love and has it been fair to you?

Yeah, I believe in love and if has been very fair to me.

At 24, do you think you are ready for marriage and its attendant challenges?

I'm very much ready for marriage and the challenges that come with it.

And what if your dream guy says quit acting, would you oblige him?

I think that is something we can sit down and talk over like mature couple. Besides, if he really loves me, he can't come and tell me to quit something that really makes me happy. If I tell you acting makes me happy and you can't take it, then you go. In a nutshell, my man must allow me to act.

How about your parents, did they endorse and bless your sojourn in Nollywood?

Yes, because they've always followed my social life right from secondary school. They only told me to always have it at the back of my mind that I have a family name to protect and also try and put God first in whatever I do.

Back to marriage again, won't you be scared going into it, especially now that most marriages in Nollywood are crashing?

That is a serious one, but I believe you can build your family by not allowing your career to affect it. As an actress, you should always have time for your family. Marriages fail, because a lot of people go into it with false illusions and beliefs. Some are also rushing into it because of pressures from families and friends. Understanding matters in marriage.

What would you say is the greatest thing being in Nollywood has done to your life and career?

I won't deny the fact that being in Nollywood has opened some doors for me. It has also helped to reposition my career and gradually taking me to the next level.

What is that main thing you hope to achieve by being in Nollywood?

I really want to get to the peak of my career and hopefully surpass the achievements of my role models, by dint of hard work. I want to act all my life.

How are you coping and handling advances from men?

I'm a lady and men will always come. Men want to date you, but you can't go out with all of them. They come always and I try to listen to them. I'm unique and have my own style. My diction also stands me out as an actress. Also, my comportment thrills most people that come around me.

Has love ever made you cry?

You cry sometimes and get happy sometimes too. Yes, I've cried for love severally. But I do not want to go deep into this discussion, so that I do not end up crying.

Whao! We cope very well as one united family; despite the production stress and hiccups we always end up well and see ourselves as a complete team, especially whenever we are shooting.