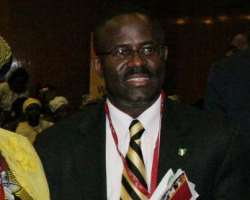 Dr. Moses Kpakol, National Coordinator of the National Poverty Eradication Programme (NAPEP) seems to be swimming from one tide of fraud to another, as the head of an agency (created by Executive fiat and with no governing laws) to reduce poverty, is  himself impoverishing not only Nigerians but also the government.

To stem the tide of the discoveries of abnormalities, especially a staggering debt of N417m yet to be paid by Keke Owners and Riders Association of Nigeria KORAN, Kpakol set up a committee to look into the case. The committee came up with a damning report that pointed fingers at Dr. Kpakol, and thus throwing the agency office in Abuja into confusion.

The investigating committee found out to their chagrin that Dr. Kpakol was funding a faction of (KORAN) and formed a rival company called Trimidan Ltd,    with the aim of sidelining Autobahn Techniques Limited, the Government approved firm and the initiator of the Keke NAPEP concept, which proposed the idea   to former President Olusegun Obasanjo, in the year 2000.

The Dr. Kpakol led firm is indeed being used to siphon the agency's funds. According to the report made available to Huhuonline, the Dr. Kpakol crony who doubles as KORAN factional President Alhaji Bashir Akinola in response to the question posed to him as to how much has been remitted to NAPEP, claimed 'we have remitted the sum of N128,506,500 three times and N90,000,000 once, thus leaving an outstanding balance of N326,523,219.5'. Whereas, when the committee requested for evidence of this payment, KORAN could not produce any.

What struck the committee again was the deceit of KORAN led by Alhaji Akinola, and the inexplicable alliance with Dr. Kpakol. This became evident when the committee visited the purported office of KORAN at Otta, 'the team was struck by the edifice which was not called KORAN office but Trimidan Limited, a private Limited Liability Company owned by Alhaji Akinola', on behalf of Kpakol.

According to the report, 'another observation of the team was that, this new company, Trimidan Limited was currently assembling KEKE tricycles, painted them in national colours and titled the KEKE NAPEP, yet NAPEP as government agency was not aware of such assemblage neither was it informed by Alhaji Akinola'.

The report continued 'suffice to state here that this is impersonation which is a criminal act by Alhaji Akinola. Also, the states seeing the KEKEs in national colours and titled 'KEKE NAPEP' would believe they belonged to NAPEP. This again is misrepresentation and deception which is criminal'

The committee concluded its report by raising fundamental questions for Dr. Kpakol; 'Above all these, the next question is, what happens to the units of KEKE NAPEP that Autobahn is to deliver to KORAN? Is KORAN going to sell them at the same price as Trimidan?

In the same vein, alarmed by the intimidating level of graft in NAPEP headed by Dr. Magnus Kpakol, the Senate Committee on National Planning, Economic Affairs and Poverty Aleviation, made up of distinguished senators headed by Senator Zaynab Kure, Iyabo Obasanjo-Bello, Ayogu Eze, Odion Ugbesia, Bode Olajumoke, Ibrahim Turaki, to mention a few, indicted the agency.

In its report on paragraph 6.6, the committee said 'from the investigations, it is established that despite the sum of N1.850 billion only provided between 2006 and 2008 on Monitoring and Evaluation, this aspect of the programmes was very weak and ineffective. Most of the anomalies identified in various states of the federation were as a result of the nonchalant attitude of the Monitoring Unit of NAPEP at the National and State levels'.

The Senate Committee further indicted Dr. Kpakol's leadership when it said in paragraph 6.10 'the committee established that relationships between NAPEP and Intercontinental Bank Plc and Oceanic International Bank Plc were skewed in favour of the banks. It is observed that the funds meant for Village Economic Development Solution (VEDS) and cope programmes- Five billion (N5bn) and two billion two hundred and sixty-five million (N2.265) naira respectively were managed to the disadvantage of NAPEP and poor Nigerians. The banks in collaboration with NAPEP officials left the fund idle in various accounts with no interest paid by the banks. It is equally established, a situation where one of the banks charged commission on turnover (COT) on NAPEP (Government) accounts against the directives of the central Bank of Nigeria.

The Senate committee lauded the contractor (Autobahn Techniques Limited) for meeting its obligation by delivering to target even in the midst of outstanding payments 'the contract for the supply of KEKE NAPEP was awarded in 2001 for the supply 2000 units, at the contract sum of N700million. All the units were supplied by the contractor and NAPEP state coordinators were in the collection and distribution of units allocated to their states'.

The questions on the minds of beneficiaries and potential beneficiaries of the KEKE NAPEP which Dr. Magnus Kpakol cannot provide an answer for are: in spite of all the indictments by several committees before and now, even including his own investigating panel, how has he remained untouchable when he should ordinarily be behind bars? If Kpakol has no backers in high places, why does he carry on with so much arrogance boasting that he is untouchable?

Keke NAPEP, was proposed by Autobahn Techniques Limited, under the chairmanship of Mr. Alban Ofili-Okonkwo to former President Olusegun Obasanjo, GCFR, in the year 2000. The aim was for youth empowerment, poverty eradication and technology acquisition, through the use of motorized three-wheel vehicles in partnership with the Federal Government of Nigeria. This proposal was adopted by the government and Autobahn was mandated to implement its proposal. The KEKE NAPEP concept consists of a combination of re-orientation, training, empowerment and thrift.

However, rather than Dr, Kpakol face the huge challenge of eradicating poverty in the country, he (Kpakol) has been victimizing and frustrating, Autobahn Techniques, which was the initiator and license owner of the KeKe NAPEP project since 1999.

Kpakol has used his office to deliberately delay payment to the company, by first issuing a number of dud cheques so as to seek out time to influence overseas suppliers to work against Autobahn. He (Kpakol) also refused to procure the contractual duty and VAT waivers in time before the government suspended it. The same man also recently made press statements to explain the effect of force majeure by way of unprecedented port congestion on the assembly and supply of the Keke NAPEP vehicles despite earlier painting Autobahn as a criminal venture.