CAN THE IDOMA BREAK THE JINX? 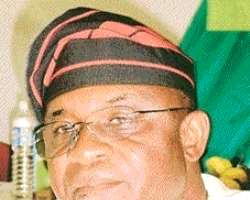 For those who think that the 2011 elections will break the jinx of Idoma's endless political battle for the soul of Benue, surprises are in the offing. The battle for the soul of Benue has begun, but the question is, who are those in the battlefield? It is between them and Tiv, the largest ethnic group in the food basket state. Concerned citizens from Tivland have joined the governorship race, while the reverse is the case for the Idoma.

Since 1976 when Benue State was created out of the old Benue-Plateau, no Idoma has ruled the state. They have only been serving as deputy governors, while Tiv have exclusively mounted the number one seat.

Even when Benue was part of Plateau State, no one from Idoma was ever a governor.

Recently, at Ochidoma's palace in Otukpo, the Idoma marched out in their thousands to endorse Suswan as the sole candidate for the 2011 gubernatorial election. He equally received the royal blessings of the paramount custodian of the Idoma community, HRM Elias Ekoyi Obekpa, the Ochidoma IV.

The event was put together by the Peoples Democratic Party (PDP) in the zone for the endorsement of the Suswam/Lawani team. Ironically, prominent Idoma such as Chief Obande Obeya, Comrade Abba Moro, Engr. Benson Aboonu and Mrs. Maria Idu were part of the team that trooped out during the event to affirm the endorsement. They, however, urged petitions writers to stop and support the Suswam/Lawani team.

The Tiv through their numerical strength, have not abdicated their interest to continue to dominate.

In 1993, during the military regime of General Ibrahim Badamosi Babangida(IBB) the Benue State House of Assembly passed a motion urging the Federal Government to create another state for the Idoma speaking people.

The point here is that the Idoma have not had a fair deal, and are not likely to have in the nearest future within Benue State as it is known today.

The 'loud silence' of Idoma towards the 2011 governorship election is worrisome to some people.

Eminent Idoma politicians
Comrade Abba Morro
He was the Chairman of Association of Local Governments of Nigeria (ALGON) Benue chapter, and Okpokwu Local Government . He contested for the governorship in 2007. Abba Moro ran the best campaigns during the 2007 PDP primaries in the state. In his campaign, he won his way into the hearts of many Tiv, but eventually lost the race. Morro would be remembered as the bridge between the Tiv and Idoma. He is now the Pro-Chancellor of the Federal University of Agriculture (UAM), Makurdi. He is the only Pro-Chancellor serving in his state of origin.

General Lawrence Onoja
General Onoja is no doubt a force to reckon with in Benue politics. A former military governor of Plateau State from 1986 to July 1988. He also governed and then of Katsina State until December 1989 during Babangida military regime. He hails from Ohimini Local Government Area. He ran twice for the Benue zone C senatorial seat, but lost to Senator David Mark who is now the Senate President. He has launched another campaign for the race into the Senate.

With the entry of Onoja into the race, it will be a battle of the Generals.

As an educationist, writer and filmmaker; Agada was able to unite the people of Orokam community through his Orokam- Arubi summit. Sequel to his defeat in 2007, nothing had been heard from the current President of Association of Nigerian Authors (ANA)

Steven Lawani
Ochagwu K'Idoma, as he's fondly called by his kinsmen, Chief Lawani is the Deputy Governor. He is from Otukpa, the headquarters of Ogbadibo Local Government Area. He contested for the PDP primaries alongside Governor Suswam, before Suswan later picked him as his running mate. Since then, Lawani has decided to remain silent, an indication that he's seemingly contended with his current position in the state.

Chief Mark Onoja
Chief Onoja contested for the 2007 gubernatorial seat, but lost in the primaries to Suswan. He came second after Suswam in the PDP state primaries. The retired federal Permanent Secretary in charge of defence is known for his affluence. Chief Onoja has shunned public life completely since his defeat in the 2007 elections.

Senator David Alechenu Mark
He is the voice of the Idoma nation; the man who believes that the agitation for the creation of Apa state would be realized. Senate President David Alechenu Mark (Okpokpowulu), has served in both military and civilian . Rising from his days as the military governor of Niger State, Mark remains 'a mark' in Idoma's political history. An achiever par excellence, his image has brought other Idoma sons and daughters into limelight. His bloodless war against Usman Abubakar during the zone C gubernatorial election in Benue State would forever remain fresh in the history of Idoma's politics.

The ex-General is no doubt a silent achiever. His ascension to the seat of the Senate President is a dream come true for the Idoma community.

Alhaji Usman Abubakar (Young Alhaji)
This is a young multi-billionaire business mogul, who took David Mark to the political battlefield in 2003 and 2007 respectively, but lost after a protracted legal battle.

This time around, Usman has remained silent.
Chief Isaac Oduh
Chief Oduh (Ejekote K'Idoma) is one of the reigning and successful politicians from Owukpa area, another Idoma community. The Itabono-born politician decked his governorship campaign posters all over Ehaje and Itabono during the 2003 general elections under the United Nigeria People's Party (UNPP), but defected for reasons best known to him. Oduh ran for the chairmanship in Ogbadibo in 2007, but lost to Hon. Clement Agada, another renowned politician from the area. Sequel to his loss, Oduh had relocated to his Otaigwu-home in Ukwo Owukpa.

Ameh Ebute
He is no doubt a quintessence of the adage, which states that, 'a dog that barks doesn't bite and vice versa.' Third Republic Senate President, Ebute during the Babangida's regime has decided to return to the legal profession when military coup interrupted their dispensation. During his short reign, he made an impact in the National Assembly visible in such a way as to be able to challenge certain executive excesses and inadequacies.

The weeks to come would show the way for the swing of the pedulum and determine whether Idoma will remain perpetual 'watchers' or involved.