Oro: The edifices, the myth of a town 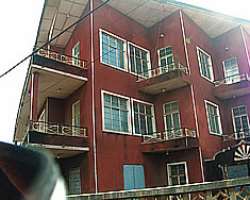 The story of Oro town in Kwara State may not be complete, if told without a mention of the characteristically magnificent buildings which dot its landscape. Surrounding the buildings, are myths that most of the houses are inhabitable for people. MOSES ALAO, reports

FOR a first-timer entering the town from either of Ilorin or Offa axis of the state, Oro seems to say nothing much about its rich history and especially the huge mansions of various styles and era. In fact, it looks nothing more than an average town that is away from the capital city but is lucky to be along a major interstate highway.

A walk through the heart of Oro town would reveal to visitors, a picture of a rural community with largely urban tendencies, as much to such visitors' chagrin, they will see features that are uncommon with towns of such size. Dotting the length and breadth of Oro, are buildings with sizes that dwarf the majority of little houses in the town and belie the looks on the faces of average people within the town. The houses reveal at most, a deep-seated affluence in the midst of a community in the hinterland of the country.

The presence of these heavy aristocratic buildings of different architectural designs and years of construction would lead curious minds to pose questions, questions whose answers one cannot get from the big buildings or their few occupants, as these great edifices are obviously inhabited by a few people, people who appear incapable of pooling the resources to build them.

Sunday Tribune sought reasons behind the construction of such edifices in a rural town whose only centre of attraction is the presence of a state college of education, according to findings; most of the buildings were built by indigenes of the town, who are said to have a knack for business and trading of various sorts.

In the words of the traditional ruler of the town, the Asanlu of Oro, High Chief Simeon Olayemi Olayioye: “Our forefathers were known for their love for trading outside the shores of the town, so, right from the pre-independence period, they went as far as Lagos to ply their trades in different merchandise. When they made their money, they were not to forget their source, they would pool their resources together to construct some of the buildings you saw and this has been the tradition of all the sons and daughters of Oro, they do not forget their source and that is why you continue to see big houses in the town.”

The houses, old and new, are mostly storey buildings with different elegant architectural designs. Sunday Tribune however discovered that most of them have one or two of the floors locked up, with no signs of habitation and in cases where they are occupied, the number of occupants is small in comparison to the size of the buildings. These seem to have lent credence to some insinuations about the sources of income of the influential owners of those houses.

“Some of these houses that you see are not ordinary, that is why people cannot leave in them. We heard about the houses, in fact, we heard that a particular house even groans at night,” said Kasim Akanbi, who claimed to be a student of the Kwara State College of Education, Oro.

According to another student, who said she did her National Certificate in Education at the college and has returned for a part-time undergraduate programme at the same institution, but declined to give her name, “how can ordinary people build these kind of houses? I am from Ibadan, how many old houses in Ibadan are as big as these? What business were these people doing in Lagos which could make them make such money to build these types of houses at the time they were built, I think they have something underneath.” When asked whether she had a personal experience with the houses said to be unihabited, she said: “I was told that some houses act funny at night, I have never lived in a big house and most of us students don't even try to contact the occupants because of what we have heard. I don't know of anyone who has been affected sha, but all these stories cannot be lies.”

However, a man who identified himself as Mr Rasaki Adeniyi, a local vigilante patrol commandant, said it was apparent that there was affluence in Oro at the time most of these houses were built, this affluence, according to him, came from trading and hardwork and not money rituals. He said: “What we heard was that Oro people have always been trading, they dealt in the sales of cement and steel in Lagos. Some of us who are strangers have also made it in this town through trading, in my experience in the last 31years; I never heard that any house groaned. In fact, I lived in Chief Babaoye's house for many years and despite the claims that the house groaned and that he made money rituals, I never experienced such. All these stories about money rituals are mere rumours; there are no houses that are inhabitable. This town has been lifted through trading.”

While reacting to the story that Oro's big houses were built through proceeds from money rituals, the Asanlu said “A big and popular town must attract different rumours. Oro has a rich history as a town that has always been united in achieving the progress of the town and its people. These rumours are lies from the enemies of progress. As a matter of fact, there is no house that is left unoccupied in the town, what could have led to such insinuation is that fact that, after our people have made their money and built these houses, they leave a floor or two unoccupied so that they use them when their families come home during festive periods. It is unfortunate that you are never here during festive periods. You need to visit Oro during any of the religious festivals, you will see our people from all over the country coming home to celebrate and that is when they use these buildings to the fullest. But I can tell you that the stories about money rituals are baseless and outright falsehood.”

He further revealed what he called the thinking of most Oro indigenes, saying that the community from a long time ago had always been at the driver's seat of its development, having built its first schools, hospitals and road networks.

“We are grateful to our fathers, when they got to Lagos, they discovered the value of education and in fact they established free education around 1930s. They made a law that once your child is of school age, you must bring him or her to Oro to enroll in school, that way we got to know ourselves, formed associations and so, whenever our people make money, they do not think of erecting big houses outside the town like most other people do, an Oro indigene thinks first of Oro and that is why several clubs in the community have been playing significant roles in the development of the town. If people can put their communities first like Oro, not only will their be big buildings to be proud about but also progress in different segments of life and the burdens of government will be reduced. We are not relenting in developing Oro, notwithstanding any rumour, we want to make sure that Oro is like any city. As people say, see Paris and die, I will say see Oro and live, feel like living there,” the Asanlu averred