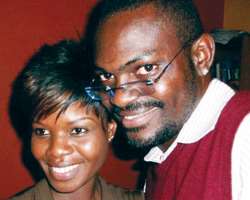 While his friends and family members were still ruing the unfortunate separation, the moustachioed hunk stunned all when he got married to Shade, nee Adetunji.

In fact, any moment from now, petite, dark-hued Shade would put to bed, bringing DJ Tee's haul to three; one from Joke and the other from a previous union. He calls his kids, Eniola and Folahan, DJ Eni and DJ F respectively.

In spite of this, sources close to DJ Tee say he's still keen on having Joke back. “He even went to the UK recently to beg Joke's mum to talk to her so she could come back to him but Joke is not willing to have him back because of his way of life.”

Probed further, our source says, DJ Tee, young, rich, hunky and good-looking, is invincible when it comes to savouring the loins of nubile beauties who come aplenty in the entertainment industry. This, the source claimed further, was the major reason his union with Joke collapsed.

When contacted, Joke declined commenting on his ex's new wife, saying however, that she was never legally married to DJ Tee. Thus, there are no implications surrounding his marriage to Shade. DJ Tee was unavailable for comments.

Arguably Nigeria's highest paid music videos director with a rich catalogue of top-notch works including commercials for multinationals, DJ Tee holds a degree in media production and a master's degree in cinematography from the New York Film Academy (London Branch). He was also in the Nigerian Army before joining the evolving music industry.

The estranged couple met when Joke was at MBI as producer and presenter of a musical programme. She later worked with Music Africa and until recently, was at Hip TV. Joke is now with SoundCity.