CHILE EXPLODES IN JOY, RELIEF AS TRAPPED MINERS ARE RESCUED 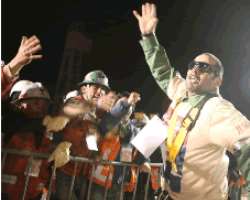 Mario Sepulveda leads a cheer for Chile after being lifted from the mine early yesterday. He was the second miner to be rescued.

One by one, the miners trapped for 69 days in a dungeon that could have been their tomb climbed into a rescue capsule and made a smooth ascent to the surface yesterday, greeted by the embraces of loved ones, cheered by joyous Chileans and watched by a captivated world.

The anxiety that had accompanied the careful final days of preparation broke at 12:11 a.m., when the stoutest of the men, Florencio Avalos, emerged from the missile-like chamber and smiled broadly after his half-mile journey to fresh air. By midday, 16 men had been pulled from the mine in just under 13 hours, including the oldest and youngest among the trapped.

The effort was methodical and free of any significant problems, and on track to finish before sunrise today. Amid an explosion of cheers, Avalos hugged his sobbing 7-year-old son and wife and then President Sebastian Pinera, who has been deeply involved in an effort that had become a matter of national pride.

Avalos was followed an hour later by the most ebullient of the group, Mario Sepulveda, whose shouts were heard even before the capsule peeked above the surface. He hugged his wife, handed out souvenir rocks from the mine to laughing rescuers, bounded out and thrust a fist upward like a prizefighter. 'I think I had extraordinary luck. I was with God and with the devil. And I reached out for God,' Sepulveda said as he awaited the air force helicopter ride to a nearby hospital where all the miners were to spend 48 hours under medical observation.

No one in recorded history has survived as long trapped underground as the 33 men. For the first 17 days after 700,000 tons of rock collapsed around them August 5, no one even knew whether they were alive. In the weeks that followed, the world was transfixed by their endurance and unity.

As it traveled down and up, down and up, the rescue capsule was not rotating as much inside the 2,041-foot escape shaft as officials expected, allowing for faster trips, Health Minister Jaime Manalich said. The rescues came as quickly as 36 minutes apart. Manalich told a news conference after eight miners were rescued that all of them were in good health, and none has required any special medication, not even the diabetic among them.

Chile exploded in joy and relief at the first, breakthrough rescue just after midnight in the coastal Atacama desert. In the capital, Santiago, a cacophony of car horns sounded. In the nearby regional capital of Copiapo, from which 24 of the miners hail, the mayor canceled school so parents and children could 'watch the rescue in the warmth of the home.'

All-news channels from North America to Europe and the Middle East carried live coverage. Pope Benedict XVI said in Spanish that he 'continues with hope to entrust to God's goodness' the fate of the men. Iran's state English-language Press TV followed events live until President Mahmoud Ahmadinejad touched down in Lebanon on his first state visit there. The images beamed worldwide were extraordinary: Grainy footage from beneath the earth showed each miner climbing into the 13-foot-tall capsule, then disappearing upward through an opening. Then a camera showed the pod steadily rising through the dark, smooth-walled tunnel.