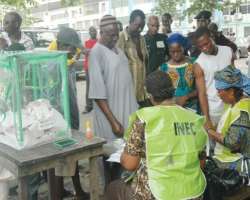 ABUJA, Oct 13, (THEWILL) - There are strong indications that the 2011 general elections could hold either in March or April or in-between the two months, this was even as the Senate today successfully pushed the second constitutional amendment bill beyond the crucial second reading and referred it to the Committee on Constitution Review.

The bill sailed through effortlessly without any dissenting voice, it was read for the first time on Tuesday and pushed immediately without any debate.

The new effort was at the instance of the Independent National Electoral Commission (INEC); which requested for more time to conduct a credible election next year.

Deputy Senate President Senator Ike Ekweremadu, who is also the Chairman of Senate Committee on Constitution Review, presented the bill on the floor.

He informed the senators that the amendment bill comprising of 10 clauses, seeks to provide new time-lines for the conduct of national elections by INEC and matters of election petition and adjudication.

"With this, the 2011 election would have been held in the month of January next year", Ekweremadu said, adding, "this would have given a gap of four months before the next occupant assumes office, and the aim was to give time for the tribunals to deal with cases of election petition".

However, he said that the fresh alterations being proposed in the new Bill are to ensure that elections are held not earlier than 90 days and not later than 30 days before the end of an incumbent's tenure.

"This leaves INEC with 60 days (March and April) to conduct election before the handover date", he said, stressing that this would also "ensure that the nation is not caught up with the seeming constitutional and electoral quagmire occasioned by the inability of INEC to implement the lofty ideas and philosophy behind the provisions of the Constitution (First Amendment) Act".

Ekweremadu further said the Bill also seeks to address the process of adjudication of election petitions with regards to governorship elections.

"With this amendment, there will be a reinstatement of governorship election tribunal, which the first amendment abrogated", he pointed out, saying appeals will now go to the Court of Appeal from this tribunal and any party not satisfied with the decision of the Court of Appeal may further appeal to the Supreme Court.

Ekweremadu said: "The aim here is to cure the ill of contrary and contradictory judgments often witnessed in Appeal Court decisions on governorship election appeals".

While stressing that the alterations have adequately taken care of the new time-lines sought by INEC and the issue of terminal jurisdiction for governorship election. The Deputy Senate President solicited the support of the senators for speedy and adequate consideration of the Bill "to avoid any ambiguity and confusion on the time when the 2011 election will take place".

Bello, who is the Chief Whip of the Senate however said the Senate should grant the time-line being sought by INEC "so that nobody again will blame the National Assembly if there is any problem".

In his contribution to the debate, Senator Victor Ndoma-Egba (PDP, Cross River State) said: "once again, the Senate is being expected to accommodate INEC's request and once again we are rising to the occasion".

He said: "I like Nigerians to note that the Senate and the House of Representatives had granted time-lines in accordance with the recommendations of the Justice Muhammed Uwais Panel on Electoral Reform. Now the National Assembly is being called upon to amend the constitution contrary to Uwais recommendation", adding, "I hope Nigerians are noting this".

Ndoma-Egba explained that he made those references so that Nigerians would be able to locate properly where the problems lie.

He disclosed that "strange text messages" have started going round alleging that senators have been paid N20 million each to pass the proposed amendment.

He appealed to Nigerians who know the senators who have collected the said money "to come out and name them because some of us have reputations to protect".

Also contributing to the debate, Senator Patrick Osakwe (PDP, Delta) urged his colleagues to pass the amendment "so that Nigerians will know that the National Assembly is not the problem".

Senator Abubakar Sodangi (PDP, Nasarawa) in his contribution to the debate noted that the advocacy all over the country now is for free and fair election.

While saying that six months should be enough for election litigation to be disposed of, Sodangi expressed the conviction that litigations arising from governorship election should terminate at the Appeal Court.

Deputy Minority Leader of the Senate, Senator Olorunnimbe Mamora, while contributing to the debate, said the electoral process is the most important feeler of democracy, adding "and we need to do all it takes to make the process work.