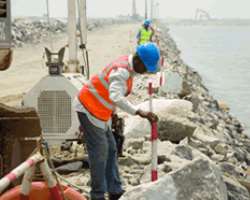 Described as the most ambitious project in Africa, it is expected to emerge over eight square kilometres of reclaimed land along the Bar Beach, Victoria Island. Already, 1.3 million square metres of prime land has been reclaimed. The planned city is one and a half times the size of current Victoria Island and is expected to set a new standard of living and working in West Africa.

Aside expectations that it would restore lost coastline that eroded since 1905 as well as provide permanent solution to the menace of ocean surge through a sea wall under construction, the city is expected to provide residential accommodation for 250,000 people and employment for another 50,000.

For years, persistent ocean surge has made life in the vicinity of the Bar Beach very unpalatable. Most houses in the area have been abandoned, while some are showing serious signs of disintegration. The project is, however, expected to raise the value of structures in the area and protect them from the menacing effect of ocean surge.

While many people have described it as a white elephant project that might not be attainable, some people have bought into the idea by purchasing some plots for development.

According to Daily Sun findings, the project will on completion have a round-the-clock independent power generation, water supply, fire service, security, entertainment centres, sewage disposal and maintenance systems. There would be a public light railway system, which will have 60 stops throughout the city and a network of internal roads. There would also be a network of fibre optic cables that will connect state of the art telecommunications as well as an internal citywide waterway.

While unveiling the project, Governor Babatunde Raji Fashola said he anticipates enormous social and economic benefits after the completion of the project.

He explained further that the concept is to provide needed amenities that will enhance tourism attraction and relaxation opportunities.

Fashola believes that the emergence of the city is expected to relieve pressure on the increasing population of the state and further confirm Lagos as the fastest growing mega city in the world.

'Investment in homes, businesses and tourism will flourish in the safe, clean and sustainable environment,' he said.

According to Mr. David Frame, Managing Director of South Energy X Limited, the contractor, the tourism appeal of the Bar Beach would be restored and the defences would be extended into the open sea, a mile and half offshore for reclamation.

He disclosed that the western boundary of the development would stretch from the existing mole constructed between 1905 and 1908, to protect the entrance to the Lagos Harbour as well as incorporate a large portion of the Marina with access to the sea.

The Ahmadu Bello Way, which is on the northern boundary of the project, he explained, would be widened to an eight-lane highway to be known as 'Coastal Road'.

'Eko Atlantic is a dynamic new city that will be built on reclaimed land and aims to provide world-class property with modern and independently reliable infrastructure to an area in high demand. It's an environmentally conscious development with compliance with international standards for city development,' he stated.

Frame noted that the Eko Atlantic footprint would be similar to that of the Manhattan in New York City, US, explaining that the giant sea wall is a large-scale marine work and engineering masterpiece designed to meet the highest international specifications and to withstand the worst imaginable Atlantic storm.

'The sea wall will act as a shield for the whole of Lagos. It is seven kilometres long and 60 metres wide at base level where the force of the ocean is greatest. It towers nine metres above the sea level and will be a stunning landmark in the new city. This powerful sea defence will stretch 6.5 kilometres. The design of the city will raise the standard of infrastructure in Lagos to a sophisticated level through its finely-structured urban plan that will create a balanced, environmentally friendly and efficient blueprint for a comfortable living. The city will be a reflection of our responsibility to the environment. It will be sustainable, clean and energy efficient with minimal carbon emissions,' Frame said.

He urged the public, especially real estate developers as well as multinationals and corporate organisations to start investing in the project.

The possibility of negative environmental impacts was dispelled by the Sales Manager of South Energyx Nigeria Limited, Marc Chaghouri, who disclosed that all scientific calculations and investigations have already been concluded.

'Extensive tests of the Eko Atlantic sea defence system were conducted in Denmark at the Danish Hydraulic Institute. Scale models of a section of the seven kilometres sea wall to protect the city withstood the worst storm Lagos could expect to face in 100 years.

Under the scheme, each of the proposed seven districts of the city would display its own unique characteristics. Infrastructure design will be standardized across the city by a specialized planning unit which would streamline approval process to ensure the quality of construction and the integrity of each development,' he said.