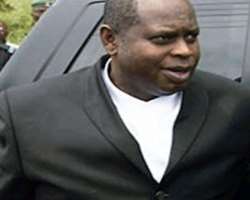 
ABUJA, Oct 11, (THEWILL) - Notable British banks have been fingered in aiding and abetting corruption in Nigerian by accepting millions of pounds in deposits from Nigerian Politicians, raising serious questions about their commitment to tackling financial and Economic crime, Global Witness said today in a published report.

The report said British banks namely; Barclays, NatWest, RBS, HSBC and UBS helped to fuel corruption and entrench poverty in Nigeria by taking money from corrupt Nigerian governors between 1999 and 2005.

It said the extraordinary thing about this development is that nearly all of these banks had previously fallen foul and indicted by the UK banking regulator, the Financial Services Authority (FSA), in 2001 by reportedly helping the former Nigerian dictator Sani Abacha funnel nearly a billion pounds through the UK.

These indicted banks, according to the report, were supposed to have tightened up their systems but as it now shows, a few years later, they were accepting corrupt Nigerian money again. There is no sign that the FSA has taken any action this time.

Global Witness's new report, is based on analysis of court documents from litigation in London by the Nigerian government to get funds returned from the UK that were stolen by two former state governors.

The banks made it possible for former Governors Dieypreye Alamieyeseigha of Bayelsa State and Joshua Dariye of Plateau State to bring their corrupt loot into the UK.

"Banks are quick to penalise ordinary customers for minor infractions but seem to be less concerned about dirty money passing through their accounts," said Robert Palmer, campaigner at Global Witness.

"Large scale corruption is simply not possible without a bank willing to process payments from dodgy sources, or hold accounts for corrupt politicians," he added.

One of the banks profiled in the report is RBS, now majority owned by the taxpayer. RBS allowed former governor Alamieyeseigha to receive bribes and bring £2.7 million into the UK. An English High Court judge found that at least £1.56 million of these funds were bribes paid by a state contractor called Ehigie Edobor Uzamere, currently a Nigerian senator, in order to win a contract to build a fence around the governor's official lodge. Global Witness has asked RBS whether it carried out adequate checks on its customer and his funds, but has not had a reply.

"It adds insult to injury that not only are ordinary taxpayers propping up failing banks, but that one of these banks has facilitated corruption in Nigeria, a country where more than half the population are still without access to clean water. This undermines British development aid, which fills the gaps created by poor governance and failing state services," said Palmer.

Global Witness is concerned that banks and the FSA have yet to take this problem seriously enough. Anti-money laundering regulations require banks to identify their customers and the source of funds, but they are not being adequately enforced. Banks need to get much better at checking where the money is coming from and whether it was obtained through corrupt practices. "The banks in this report may not have broken the law, but corrupt money still entered the UK and so our financial system is still complicit in corruption."

This is an ongoing problem, as shown by the action taken against HSBC by the US regulators last week. They required HSBC's American arm to overhaul its due diligence systems following violations of US anti-money laundering laws and inadequate monitoring of transactions and customers, including ‘politically exposed persons' - ie the foreign senior officials who could be involved in corruption.

Meanwhile, the British coalition government plans to abolish the FSA, and whatever body replaces it must take corruption seriously, said the report.

The report further said that government and the new regulator must send a clear signal to the financial sector that corrupt money is not welcome, and that the banks themselves must demonstrate much more clearly, the steps they are taking to stop dirty money entering the financial system.