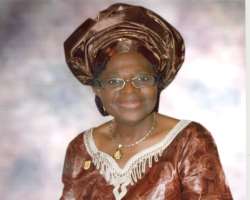 Professor Ajakaiye was also among the 50 Nigerian women who were honoured with a special award by the First Lady, Dame Patience Goodluck Jonathan, on September 29, 2010, at the 50th independence Award for Women of Distinction.

The AAPG award for Professor Ajakaiye was announced in a letter from the office of the association’s Executive Director, Richard D. Fritz, which listed her in the "Distinguished Service Category" for 2011, making her the first and only African listed in that category of awards.

The award will be presented to her and the honorees at the annual meeting of the Association billed to hold in Houston, Texas, in April 2011.

A renowned geophysicist and academic, Ajakaiye was elected AAPG’s Africa Region President (2005 – 2007) and served as member of the Advisory Council of AAPG from 2001 to 2004.

As a member of the AAPG’s Publications Sub-Committee between 2002 and 2005, she co-authored the book, Course Manual & Atlas of Structural Styles on Reflection Profiles from the Niger Delta, with A. W. Bally. The book has become a reference material on seismic studies and research on the oil-rich Niger Delta region of Nigeria and similar deltas worldwide.