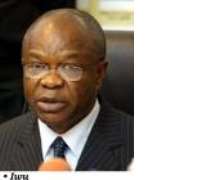 The 2011 general elections will not be held on one day if the proposal by the Independent National Electoral Commission (INEC) is accepted by the National Assembly.

Under the 2006 Electoral Act, elections into a particular category of public offices – such as National Assembly, Governorship and Presidential – are to be held on the same day in the 36 states of the federation and the Federal Capital Territory, except in the case of litigation.

However, the logistical nightmare with the movement of materials, recruitment and deployment of electoral hands as well as provision of adequate security nationwide might have influenced INEC's decision to send a bill to the National Assembly to stagger the elections.

INEC Chairman, Professor Maurice Iwu, also told journalists in Abuja yesterday that the commission had decided to do away with ad hoc staff who, by nature, have no allegiance to the commission and who are susceptible to manipulation.

Under the staggered election proposal, elections may be held on different days in the six geo-political zones of the country.

THISDAY learnt that the proposal was informed by the relative peace and security under which the rerun elections ordered by various elections petitions panels have been held in seven states of the federation. These are Kogi, Bayelsa, Adamawa, Kebbi, Cross River, Sokoto and Ekiti.

INEC's case was further strengthened in Ekiti where the governorship election was held in 10 local governments last month. Fears of violence led to the postponement of Oye-Ekiti election, which was eventually held without any major incident.

Nigeria had experimented with staggered presidential primaries in 1991 during the botched transition to civil rule, but they were eventually annulled and the candidates disqualified by the military government of Gen. Ibrahim Babangida on the ground of mal-practices.

“The way things are now, the governorship elections would, by accident, not be held on the same day anymore, because all the states where we have conducted rerun elections are already out of tune with the rest of the country,” an INEC official told THISDAY.

In India, elections are staggered, but in the United States, only the primaries are staggered as the general election is held on the same day across the country.

INEC's decision to do away with ad hoc staff, Iwu said yesterday, would ensure effective surveillance and control of future elections in Nigeria.

However, if the elections are held on the same day, INEC says it does not have enough men and women on its staff to conduct the poll, further strengthening its case for “staggering”.

Under the proposed arrangement, only INEC staff and members of the National Youth Service Corps (NYSC) would be used for such elections.

Iwu expressed hope that youth corps members would be less liable to being compromised because “they are educated, have fixed addresses and have a stake in Nigeria's future”.

Iwu did not state the stage the bill was or when it is expected to be present before the National Assembly.

On the future of democracy in the country, Iwu underscored the need for optimism, maintaining that cynicism, “no matter how elegant, robust and vigorous” could not offer solutions to our problems, especially those confronting the electoral process.