WHAT IS THIS ALL ABOUT: POWER OR THE PEOPLE? 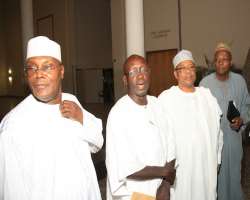 
"What the hell is going on in that your country?"

"If you say so, but you know I have another passport unlike people like you, the na-inside-am-I-go live-and-die crowd"

"We should all be concerned."

"I am but whatever it is that is going on at this moment in that country sounds like pre-war sound bites to me, and all the people behaving badly just have to be called to order, from the Presidency down to those who call themselves statesmen but care little about the state."

"The grandstanding, the name-calling, the mudslinging since bomb blasts blasted away whatever hopes we had on October 1, on the occasion of Nigeria’s golden jubilee should stop, because this is not being done in my name."

"So what is this all about?"

"What else? Power, personal ambition"

"From a distance, the entire country appears completely distracted. I read the President’s statement on Facebook, and I shook my head vigorously."

"One week after Nigeria’s golden jubilee, the leadership class is in disarray. Abuja has become the staging ground for a bigger battle. The Presidential race has been turned into a Niger Delta vs. North crisis."

"Is the National Assembly still talking about the Electoral Act and Constitution Amendment?"

"The National Assembly is talking about bombs and Anti-terrorism Bill"

"The way things are, the 2011 elections already appear jinxed. First, there was a problem of funding. Then, the problem of time-table, and now nobody even knows when the self-imposed confusion will be addressed."

"John Campbell has been vindicated, I think. When he wrote his piece: "Nigeria on the brink: what if the 2011 elections fail?" (September 9, Foreign Affairs), he was condemned by the Nigerian authorities. The Nigerian Ambassador to the United States publicly called the man a prophet of doom. I can point to at least three paragraphs in that Campbell piece that have been confirmed by the events of the last week alone."

"Are you surprised? There is a terrible culture of intolerance in Nigerian official quarters, a military hangover that has persisted even under civilian rule. You only have to say something that someone doesn’t like or that does not favour their paymasters and they start calling you names."

"It is a sign of illiteracy. Even if you don’t like a man’s views, try and study what he has to say and then state your own response."

"Nigerians have said exactly the same things but no one appears to be listening. It is difficult to think; it is much easier to throw stones."

"Well the stones are hitting their heads now. With Presidential aides calling some people terrorists and liars, and some other people asking for the President’s resignation, and all that talk about idiocy and idiots, the drumbeats are beginning to sound and we must be worried."

"I think President Jonathan caused it. He threw the first stone. He should have stayed above the fray."

"No. I disagree. I don’t see what he has done that is wrong, come to think of it."

"The man practically absolved MEND of blame shortly after the Bomb blasts, even when MEND admitted responsibility, although he now denies that he said so, which is fine. Then he started talking about being a true Niger Deltan. He has practically brought up a new MEND, the amnesty MEND, so one group claims responsibility, and another declines, and now you have every group in the Niger Delta expressing support for the President. What is that all about?"

"You don’t understand this matter at all."

"The President did well by visiting the victims and by expressing sympathy, but he should have left the matter there, and allow other people to do the job of finger-pointing and the trading of blames."

"You are feeding me with beer-parlour logic, please."

"Look, don’t insult me. My friend what’s the matter with you?"

"Okay, let’s look at it this way. One, I don’t see anything wrong in the President making statements the moment the incident occurred. When there was 9/11, President George Bush immediately took charge of the matter. And he pointed fingers, he issued threats. When a bus exploded on the streets of London killing innocent people, the Prime Minister Tony Blair talked tough."

"You are comparing apples and oranges."

"Where is the apple? Where is the orange? A bomb explosion in which lives were lost and national security was compromised?"

"And then the President had to appoint a new National Security Adviser from his village?"

"So, he should go and get an NSA from the North? Or from your village so that you people can keep allowing bombs to explode? As I see it, that bomb explosion was all about President Jonathan and his political ambition. It was meant to embarrass him and show him off as incapable of leadership. And you can see that his attackers appear to have rattled him, and that is why he is fighting back. He is taking the battle to them."

"So, he thinks an NSA from his village…"

"Stop that. The last time there was an NSA from another village, they smuggled a sick man into the country without telling Jonathan even when he was acting President. If I were in his shoes, I won’t hand over my security to such people. And as for the new NSA, is the man not qualified? He is. He was once Chief of Defence Staff, and head of Military Intelligence, is that not enough for you? When you run into trouble in Nigeria, you are better off with your kinsmen around you."

"So this is all about man-know-man."

"In the end, that is what it is. Whoever set off those bombs, wanted to show that Jonathan has no political base. What better way to embarrass him than to have MEND sabotaging Nigeria on Independence Day? If you can establish that, then you explode the myth that it is better to have a Niger Deltan as President in order to secure peace and stability in the Niger Delta and the oil fields. That way, you knock the bottom off Jonathan’s campaign and prove that the game is open."

"The game looks open to me, right now."

"And that is why Jonathan is talking about treason charges to show that if he is pushed, he will bark and bite, and that he is in control of his political constituency."

"And it doesn’t matter if MEND truly did it?"

"In this game of survival of the meanest, the truth doesn’t quite matter. You must look at the sub-text. That is where the danger lies."

"But what of what Henry Okah said? Suppose he is telling the truth? His statement should be investigated. The truth is somewhere in-between all the lies and half-truths that they have been throwing at Nigerians."

"We should be worried about the immediate future. If there is no peace before the elections and the Northern Political Leaders Forum and Northern PDP Presidential aspirants continue to heckle Jonathan publicly and succeed in presenting him as anti-North, there could be trouble. They are taunting him and he is swallowing the bait."

"So you see, we are saying the same thing. This is about personal ego and ambition. It is not about us, the Nigerian people. But as for those Northern leaders, I think they are just bluffing. All that Jonathan needs to do is to lock up one or two of them for insulting the President and threatening national security."

"The Presidency is very powerful."

"The matter is more complex. Have you not seen that the Ijaw National Congress and the Ijaw Revolutionary Council have also issued statements full of innuendoes, while trying to express support for the President?"

"Na so the thing dey start oh. May be that is what this country even needs."

"I won’t put it that simplistically. Now that it is so possible to explode bombs in the Federal Capital Territory, what is needed is just a few more bombs just before the elections, or something far more explosive and costly and the whole country will be in real trouble. If it is mishandled, we may be faced with deadly consequences and we may have to look again at Campbell’s prophecy"

"Stop quoting Campbell. Fifty years after independence, we are still relying on what outsiders say about us. We should be ready to clean up our own mess after 50 years."

"Well, we seem to have missed the boat. October 1, 2010, the occasion of the golden jubilee should have marked a new beginning for Nigeria. It turned out to be a day of murder and bloodshed and the re-opening of old wounds."

"I am an optimist. Nigeria will survive, even if the President is running out of luck."

"We should start by asking for a proper audit of the expenses on the golden jubilee anniversary. It is not enough to tell us that an audit committee has been set up. Did the government buy brand new cars? Where are those cars? And so on. We should start asking questions."

"By the way, do you know that the best way to scare people in Nigeria now is to just shout Bomb! Bomb!! Bomb!!! and people will vote with their feet."

"Well, maybe that is a good development, after all in the Abuja bomb blast, more people died from the second blast because rather than take to their heels after the first, they thought it was a Nollywood show going on and they all went to have a look."

"Well, just call your leaders to order; let them know that this country belongs to all of us and that there is also the people’s law of treason."

"Tell me about that."

"Another day, fella. You doing good?"