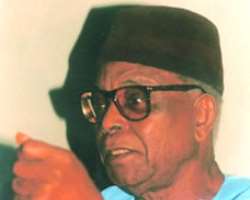 In a last minute bid to rally the opposition against the Peoples Democratic Party (PDP) ahead of the 2011 election, elder statesman, Chief Anthony Enahoro will today meet with leading presidential aspirants, chairmen and secretaries of 21 political parties in his countryhome in Benin City, Edo State.

Letters of invitations to the aspirants and party officers were sent out last week. Sources close to the conveners of the meeting said Chief Enahoro personally called some of those invited on phone while the chairman of the Social Democratic Mega Party (SDMP); Professor Pat Utomi signed the letters on behalf of Chief Enahoro.

Sources close to Chief Enahoro said '24 thinking' political leaders are expected at the meeting. Some of the prominent politicians invited includes: General Muhamadu Buhari of the Congress for Progressive Change (CPC), Atiku Abubakar of the PDP, Chief Olu Falae, Alhaji Ibrahim Shekarau, Attahiru Bafarawa and many of the Preside4ntial aspirants on the platform of other political parties. Others invited include Chief Ayo Adebanjo, Balarabe Musa, Rsheed Shitta- Bey, Alhaji Jakande and many others.

One of those close to Enahoro said the purpose of the meeting is to make a last minute attempt to bring together people of the same thinking on what direction the nation should go and see to the possibility of the various political parties forming an alliance in preparation for the 2011 election.

'Honestly, I know many of the leaders I mentioned to you were invited. There are many big names invited that I cannot immediately remember. We shall only know those who will honour the invitation when we get to the meeting.

'The meeting is not just preparation for the 2011 elections. The conveners of the meeting are planning for All Politician Summit to discuss the present state of the political situation in the country today. The date tentatively fixed for the Summit is November 21 and 22nd, ' the source said.

Chief Enahoro had in March last year called similar meeting in Lagos. The meeting enthusiastically endorsed the proposal for the formation of a mega party that would be strong enough to challenge the PDP at future elections. After series of meetings in Lagos and Abuja, leading proponents of the mega party abandoned the project.

General Buhari and Former Vice President, Atiku formed the National Democratic Initiative (NDI) which according to Falae at the time was to enable them have a platform to convince their supporters in the north that they were not being politically sold to southerners.

Eventually, General Buhari on his own formed the CPC while Atiku rejoined the PDP. The two leading politicians from the north are today leading presidential aspirants in their various political parties.