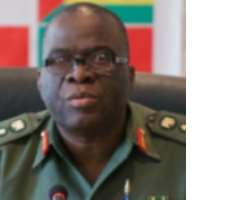 Huhuonline.com understands that the State Security Service has arrested Chief Raymond Dokpesi, the Director General of Ibrahim Babangida campaign organisation and Chairman of Daar Communication. He is  currently undergoing interrogation at the

The state security service has kept a tight-lip about Chief Dokpesi arrest, but a statement from Senator Mahmud Kanti Bello, deputy director general of IBB 2011 campaign organisation confirmed his arrest.

Hear him:
' The Director General of the IBB 2011 Presidential Campaign Organization, High Chief Raymond Aleogho Dokpesi was invited Sunday, 3rd October, 2010 by the State Security Services [SSS] to report to their headquarters by 11am Monday, 4th October, 2010   'As a law abiding citizen , he promptly complied and reported to the State Security Services headquarters by 10am this morning as directed'.

'Between 11am and 5pm this evening Monday 4 th October, 2010, all telephone calls placed to him were unanswered. The Campaign Organization dispatched a high powered delegation comprising four directors of the Campaign Organization and his personal Lawyer to enquire as to his whereabouts. The delegation was denied access to High Chief Dr. Raymond Dokpesi and had to return to the Campaign office at about 6.50pm. No reason has been given whatsoever by the State Security Services for his invitation, and detention, neither is his whereabouts known'.   'As at the time of writing this statement [7.50pm], High Chief Raymond Dokpesi has been denied access by the SSS to his family, personal Physician, Lawyers, and the Campaign Organization. As we write, his family is worried, and deeply concerned for his safety, health and his well-being. In addition, his fundamental human rights as enshrined in the 1999 Constitution of the Federal Republic of Nigeria are being violated'.

'High Chief Raymond Dokpesi is a well-respected and patriotic Nigerian who has continued to contribute selflessly to the growth, development and stability of the Nigerian nation'.

"The IBB 2011 CAMPAIGN ORGANISATION hereby condemns in the strongest terms the detention of its Director General and calls for his immediate release. We wish to draw the attention of local and international communities to the growing politics of intolerance, intimidation, coercion, persecution and harassment in spite of the avowed commitment to the rule of law by the present administration'.    'We call on the security agencies of the country not to allow themselves to be used as tools to settle political scores particularly on simple intra-party conflict.   In a related development, President Jonathan has appointed General Owoye Azazi as the new National Security Adviser. He replaces Gen. Aliyu Gasau who resigned recently, to run for the office of the president

A statement by Ima Niboro, Special Adviser to the President on media, said the new national security adviser joined the Jonathan administration from a rich and illustrious career in the military.    "Commissioned into the army as a military intelligence officer, he rose to the position of Director of Military Intelligence [DMI]".

"He was thereafter appointed as General Officer Commanding 1 Infantry Division, from where he was further appointed as Chief of Army Staff. Gen. Owoye Azazi rose to become the Chief of Defence Staff and retired meritoriously on the 28 of August, 2008,".