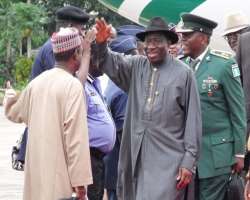 PHOTO: PRESIDENT GOODLUCK JONATHAN DURING HIS VISIT TO LAGOS AT THE WEEKEND.
Listen to article


One could not have possibly imagined the height of contempt which some of the nation’s political leaders have for the minorities of the South-South region, until the presidency of Dr. Goodluck Ebele Jonathan. Never in our 50 years of political independence have there been such blatant attempts aimed at public ridicule, humiliation, threats and even intimidation of an incumbent President, by leaders who believe that political rule at the highest level was their preserve and birth-right.

Granted, we are in a democracy the main ingredient of which is freedom – freedom of speech, of association, movement, and freedom to hold and express any political opinion. To a large extent, therefore, some of the fire-works and missiles coming from our Northern leaders who support the zoning formula of Peoples Democratic Party (PDP) proved beyond doubt that we are, truly, operating a democratic system.

But, there is a limit. It was for, instance, beyond the acceptable limit when Malam Adamu Ciroma, former Minister of Finance, threatened at a NEC meeting of the PDP that there would be chaos in Nigeria, if the zoning formula was not implemented by the party for the forthcoming presidential election. Only last week, Ciroma repeated the same warning although narrowed it down to the PDP. According to him, "the PDP will regret its decision to allow President Jonathan to contest the presidential election in 2011"

Malam Ciroma belongs to the old order of Northern politicians who grew up with the belief that at independence in 1960, the British colonialists entrusted them with the political leadership of this country. Other relics of that order past persistently refuse to accept the inevitability of change, include Tanko Yakassai, Yahaya Kwande, Lawal Kaita, Magojai Dambata, Muhammed Magoro, M.D Yusuf, Ahmadu Kurfi, etc. For them, Jonathan should return to the creeks where he belongs. In fact, they believe that the only good thing that can ever come from that area is the oil that God kept there for them (the Ciromas, Kaitas, Yakassais, etc.)

On 18TH June 2010, ThisDay newspaper reported that a meeting of over 150 Northern political leaders comprising the same Ciroma group met in Kaduna to work out strategies on how to prevent President Jonathan from contesting the election. To put it mildly, such gang-up is immoral and detrimental to the future of this country.

Under the platform of the Northern Political Leaders Forum, Ciroma and his group trumped up a number of allegations against President Jonathan, that:

... he is undermining the Nigerian constitution;

... falsifying the history of Nigeria;

... is using security agents to terrorize and humiliate politicians;

... is using EFCC to harass and intimidate Governors opposed to

his bid to contest the presidential election;

... is politicizing the armed forces

... is infringing on the constitutional rights of respected Nigerian

... is adopting the do-or-die style of politics with the goal of

... and that his wife berated the Governors of Rivers State;

For these charges, the Ciroma group is calling on the Nigerian people and the international community to call President Jonathan to order.

Unfortunately, some of the younger generations, individuals, politicians, socio-ethnics associations, and even civil society organizations, are being polluted with the dangerous sentiments harboured by the likes of Ciroma. It was not surprising therefore when High Chief Raymond Dokpesi, Director General of the IBB Campaign organization, accused President Jonathan of planning to commit a number of criminal and immoral acts, including threats to his life and those of his immediate family members, kidnap of his son and harassment of his business organizations with tax officials.

Alhaji Atiku Abubakar, whose political fortunes have turned out to be the worst ever experienced by any Nigerian politician since independence, is one of the political aspirants to contest the presidential election on the platform of PDP. Atiku seems not to have any agenda of what he intends to do for Nigerians as his preoccupation has become blackmail and intimidation of President Jonathan. Two weeks later he was quoted to have made the unfounded allegation that the President was using state funds for his campaign. This week, he said that President Jonathan could not be "trusted with the PDP mandate in 2011" because of his interpretation of the zoning formula of the party.

By far, the greatest show of contempt for President Jonathan came from the socio-cultural group, Arewa Consultative Forum (ACF) which totally misunderstood or deliberately misinterpreted the position of the President on the zoning controversy. President Jonathan never said that there was no zoning in the PDP; what he said was that the zoning applies only to those positions that are within the control of the party and that it is after the emergence of the President that the other offices such as the President of the Senate, Speaker, National Chairman of the Party, etc; can be zoned.

The President’s position on zoning is correct, logical and factual which may not be easily comprehended, (understandably may be because the President has a Ph.D and, therefore, intellectually distant from most the members of the ACF.) The questions which the ACF should answer are: Is zoning an official policy of the PDP? Is it not a mere decision taken at a caucus meeting? How did zoning get into the party constitution? Was there a resolution taken on it at any convention of the party? If so, when and where?

President Jonathan, by the Grace of God, is the President, Commander-in-Chief of the Armed Forces of the Federal Republic of Nigeria. And he is the Leader of the ruling Peoples Democratic Party (PDP). It is rude and, indeed, a mark of utter disrespect for a group such as the ACF to call for his resignation because of his interpretation of a clause in the constitution of the party. In fact, the insistence of the Forum that President Jonathan cannot contest the presidential election, long after the party had ruled to the contrary, is itself an act of gross disrespect to the party. President Jonathan should be accorded the respect that the Presidency deserves, no more no less.

Persistent blackmail, intimidation and threats of fire and brimstone cannot solve the problems of this country. Our politicians must come to terms with the realities of today and accept that every Nigerians, no matter his or her ethnic origin, is entitled to aspire to the highest position in the land.

Mr. Ibinabo-West contributed this piece from Port Harcourt and can be reached via [email protected]