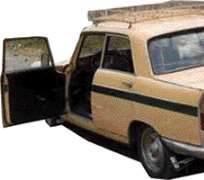 Peugeot 404
Once upon a time when we had roads, we had brand new cars plying the roads. The roads were not congested with traffic like the gridlocks of today.

It was never the practice for Nigerians to buy 'second hand' cars, but times have changed so much that all over the country, you see fairly used cars, popularly known as tokunbo.

Many full grown Nigerian are yet to know the joy and the leisure of riding or driving in a 'tear rubber' car; they are used to 'Tokunbo' cars and they will celebrate their acquisition with pomp.

In those days gone by, car manufacturers didn't spare quality when they are working on the car. Cars coming into the country were then made of pure steel, a complete reverse from the type of cars that ply Nigeria's roads today. Nigerians now drive around in cars made of fibre, which are of course very allergic to pressure!

The cars of old were generally driven on well built and maintained asphalt roads inherited from the British and immediate post-colonial era. In the good old days, only very few families and individuals owned cars. Cars were really a luxury, which only top politicians, very senior civil servants and rich business men could afford.

The cars were many imported mainly from Britain, Germany, France, and to some extent America and Japan. Some of the most popular models were Peugeot 403, 404, Morris Minor, Morris Mini, Citreon, Fiat, Mercedes Benz and Volkswagen. From Japan came cars like Datsun 120Y, 120K, Datsun 180, and Toyota

For example, the French, although not colonial masters to Nigeria, have cars like Peugeot 404, Fiat and Citroen, Japan has cars like Datsun 120Y, Datsun 120k and Datsun 180, along with some Toyota brands.