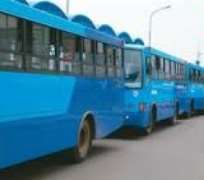 I'm on the BRT bus on my w\ay home today, and I am thinking: this nonsense BRT bus driver, please shut up! There he is threatening every 'not-so-priviledged' driver who tries to cut in front of him. “Enter! Enter now!” he snarls to passengers who have difficulty getting onto the bus. After sometime, it begins to get really irritating.

They call themselves 'Fashola pikin'. They disgust me, those yeye BRT drivers who think that a blue uniform and control of the steering wheel of a big blue bus suddenly makes them kings of the road. Have you ever tried to make a turning from one lane to another through a BRT lane, while one of the buses is coming from a great distance, at top speed I might add? On the roads of Lagos, every moment is designed to show who is master and owner of the road. These days the roads belong to BRT. Fiam! The driver rushes past you, almost brushing your car in a bid to prevent you from crossing the yellow lane before it. If in attempting to do so, you do get brushed, you'd be lucky if he does not stop, because when he does it will be to unleash a round of abuse from the vantage point of a 'government driver' or 'Fashola pikin'.

On Lagos roads, every mad person in uniform has some form of power and with all the colours of the rainbow well represented, we're not always sure which bodies they belong to, where one's power ends and where another's begins – do those in question even know? All the colours just blend together to form a spectrum of often unjustified tyranny, if tyranny is ever justifiable. In fact even wearing one of those flimsy fluorescent-coloured vests gives you the power to rain abuse on just about anybody over a traffic offence, real or imagined.

My take? It's not enough to give someone a uniform and put him behind the wheels of a public bus or on the road for that matter. Truth be told, the whole of Lagos-on-the-road, needs a comprehensive course – Road Etiquette 101. I suggest that the 'privileged' Fashola pikins, and all the other government road agents should be first in line!