Fela: This Bitch of a Life, Authorized Biography for Late Fela Anipolapo Kuti 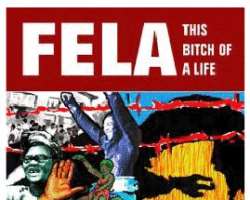 Sometimes it seems that Fela has never been so popular across the world ashe is today. With Fela the Musical (produced by Jay-Z and choreographedby Bill T. Jones) a smash hit on Broadway and Fela the film (starring Chiwetel Ejiofor, who else?) in production, Fela is rapidly becoming a global superstar for the next generation.There is therefore no better time then for the re-publication of Fela: ThisBitch of a Life – the authorised biography of Africa?s greatest ever musician, Fela Anikulapo Kuti. The book first published 28 years ago, is written in thefirst person, so reads like an autobiography. The full technicolour honesty of the writing makes it seem like the reader is engaged in a one-to-one conversation with the King of Afro-beat himself.In just under 350 pages, the reader is invited to the living room of Fela?siconoclastic mind, discovering from the inside the key turning points in his life– his childhood in Abeokuta and the forceful influence of his parents, especially his mother; student life in England; his coming to black consciousness in America (and his encounters with Funk and some of the key players in African-American musical and political culture); his return to Nigeria and setting up the Shrine and Kalakuta Republic and his increasingly painful struggles with the authorities in Nigeria in the 1970s and 1980s. Readingabout Fela brings to life post-Independence African history in all its turbulenceand drama. The book also includes interviews with some of Fela's wives, allowing the reader to get an intimate perspective on Fela as a husband andas a lover. Fela: This Bitch of a Life was first published in 1982. The new version, published by Cassava Republic, includes remarkable never-before-seencontent: a Preface by renowned Brazilian musician and statesman GilbertoGil, a Prologue by Fela?s friend Lindsay Barrett, an introduction and a movingepilogue by Carlos Moore written specially for this edition and discography. It also includes the two part magnificently illustrated Afa Ojo sections, which delve into the mystical aspects of Fela?s character. The cover and artwork for this new version were designed by Lemi Ghariokwu, the original designer of some of Fela?s most iconic album covers. The book is set to become a

Author.
27 th September, 2010 collector?s item and to take pride of place on bookshelves across the continent.With Nigeria set to celebrate 50 years of Independence on October 1st , there is perhaps no better time for a reflection on some of the country?s heroes, social and political history. Fela's music is guaranteed to outlive us all becoming part of our own classical; it is therefore equally important for future generations (and younger African children today) to have the opportunity to find out more about Fela the man and Fela's music.Cassava Republic's Publishing Director, Bibi Bakare-Yusuf, says “We are very excited to make Carlos Moore?s classic and illuminating biography of Fela Kuti available for the first time on the continent. We also believe thateveryone interested in African music and socio-political history will not want tomiss the opportunity to own a copy of this particular edition.”

THE BOOK TOUR
To celebrate the publication of Fela: This Bitch of a Life, the author, Dr Carlos Moore, will be touring Nigeria in October. The tour events will be the only place where the book will be available before it goes on general release in January 2011. The tour presents a fantastic opportunity to have the book signed by the author itself and to be among the first few hundred people toown the book on the continent. Apart from the Monday, 11 th and Wednesday 13 th all events will attract an entry fee of N2000 (which includes a copy of the book).

BLURBS
“I want each and every African to feel that s/he OWNS Fela; that his legacy must be defended as a vital part of the Pan-African dream is burning in our hearts. That is why I did the book – at Fela's request, yes, but at my own urging.” — Carlos Moore

“Fela was an incredible pioneer. His rhythms and influence have been absorbed into so much of the music around today, and the musical worldowes him a debt of gratitude.” —Stevie Wonder

“An amazing musical genius with a boisterous sense of humor, Fela was an immovable rock in his fight against corruption. Surviving several immoral military regimes, it is a miracle that he died from natural causes rather than their torture.” —Hugh Masekela

“Fela is still a voice for Nigerians. He brought our struggles and social challenges to the fore. It?s vital for us to use his life and music as a referencepoint for social consciousness. Fela protects our identity and reminds those in power to respect our rights as young Africans.” – Naeto C

“His music was exotic, royal, powerful, and captured the spirit of Mother Africa. He was respected and loved not only for his music but for his intellectand his dedication to African traditions. Fela was one of the most courageousindividuals I have ever met.” —Randy Weston

“Fela's biography is important to us all now because it sounds like he isspeaking to us from the world beyond. It goes with our aphorism which saysthat 'Fela Lives.' He lives in the minds and hearts of us all who knew andloved him and to whom he imparted so much knowledge and joy. I personally look forward to reading this book once again, as it provides so much understanding into the mind of such a GREAT MAN.” —Femi Kuti

“Fela: This Bitch of a Life was my first-ever book […] Spiritual growth for mestarted there.” – Seun Anikulapo Kuti

“He has influenced music in Africa more than anyone else.” —Guardian

“The most influential and significant musician ever to emerge from Africa.” —Time Out