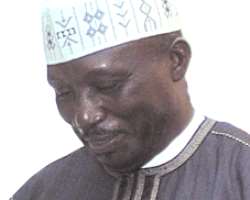 Tijani
Following last week's tragedy, which claimed the lives of two referees during the Cooper Test exercise in Abuja, concerned medical experts and physical educationists have advised sportsmen and women to go for proper medical check-up before engaging in serious exercises.

'Sudden Cardiac Death (SCD) is a sudden, unexpected death caused by loss of heart function. It is the largest cause of natural death across the world. It is responsible for half of all heart disease deaths.

'Sudden death occurs most frequently in adults in their mid-30s and 40s and it affects men twice as often as it does to women. SCD is rare in children, affecting only one to two per 100,000 children each year,' according to Dr Olatunde.

'Heart attacks occur when there is a blockage in one or more of the coronary arteries, preventing the heart from receiving enough oxygen-rich blood. If the oxygen in the blood cannot reach the heart muscle, the heart becomes damaged.

'In contrast, sudden cardiac arrest occurs when the electrical system to the heart malfunctions and suddenly becomes very irregular. The heart beats dangerously fast. The ventricles may flutter or quiver (ventricular fibrillation), and blood is not delivered to the body. In the first few minutes, the greatest concern is that blood flow to the brain will be reduced so drastically that a person will lose consciousness. Death follows unless emergency treatment is begun immediately,' he added.

'Some people may experience a racing heartbeat or they may feel dizzy or faint, alerting them that a potentially dangerous heart rhythm problem has started. In over half of the cases, however, sudden cardiac arrest occurs without prior symptoms.

'Most sudden deaths are caused by abnormal heart rhythms called arrhythmias. The most common life-threatening arrhythmia is ventricular fibrillation, which is an erratic, disorganised firing of impulses from the ventricles (the heart's lower chambers). When this occurs, the heart is unable to pump blood and death will occur within minutes, if left untreated.

Can it be prevented?
'If you have any of the risk factors listed above, it is important to speak with your doctor about how to reduce your risk. Keeping regular follow-up appointments with your doctor, making certain lifestyle changes, taking medications as prescribed and having interventional procedures or surgery (as recommended) are ways one can reduce ones risk.'

Follow-up care
'Your doctor will tell you how often you need to have follow-up visits. During your follow-up appointments, your doctor will evaluate your overall health and your heart health. 'To prevent future episodes of sudden cardiac arrest, your doctor will want to perform diagnostic tests to determine what caused the cardiac event.

Tests may include ECG, ejection fraction, ambulatory monitoring, echocardiography, cardiac catheterization, and electrophysiology study.' In his opinion, Dr Yusuf said it's dangerous for athlete to run without warming up the body system. He said the heart needs flow of blood to function properly.

He said human body works like auto engine. 'Human body is like a car and it has to be in good condition to meet the needs of the owner. 'Before it is used, the owner must check the level of the lubricant and other functioning objects in it before they put it on high way. It has to be warmed and it has to be moved gradually through the gear before the final blast. So, the referees taking part in the Cooper Test need to first jog round the pitch before engaging in the long distance race to keep the heart condition in proper shape for the race.'

Dr Olatunde advised athletes to stop smoking and always watch their weight to keep fit at all times.

'They should engage in regular exercise, take low-fat diet and manage diabetes and other health conditions.'