THE MAKING OF ONU AS ANPP CHAIRMAN 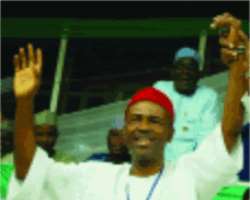 After three postponements, the All Nigeria Peoples Party (ANPP) eventually held its national convention last Sunday, during which new executive leaders were elected. At the end of the day, former Abia State governor, Dr. Ogbonnaya Onu, who was not part of calculations before the aborted previous conventions, emerged as chairman.

Indeed, Onu became a consensus candidate considered as capable of helping to heal the wounds of the party. Other aspirants, like Dr. Yussuf Musa, a deputy national chairman (North), Chief George Moghalu, former national secretary of the party; Emmanuel Eneukwu, national publicity secretary; Alhaji Gambo Mogaji, chairman of Board of Trustees; Chief Harry Akande and Chief Odigie-Oyegun, former governor of Edo State who criss-crossed the country to sell their respective candidacy, had to step down for him.

The issue of who becomes the chairman of ANPP was indeed, said to be at the centre of the crisis that rocked the party and broke it into two. Saturday Sun gathered while the camp of Governor Ibrahim Shekarau, a presidential aspirant of the party, wanted its preferred candidate to take over from Chief Edwin Ume-Ezeoke leadership, Borno State Governor, Ali Modu Sheriff, had his own different agenda. He was accused of manipulating the Ezeoke leadership of the party to frustrate Shekarau's ambition, by surreptitiously, delaying the Congress, to allow his group observes events in other political party before deciding the person who would help them achieve a future plot to be chairman.

Aggrieved party members said this was why certain actions that would facilitate holding the convention, such as timely notification of Independent National Electoral Commission (INEC), was not done, in order to justify the earlier postponements.

However, the Shekarau group had drawn a battle line when there was a move to postpone the convention for the fourth time. The group had set up a parallel National Executive Committee, which held its NEC meeting on August 27 and dissolved the Ume-Ezeoke led leadership and raised a Transition Management Committee (TMC) headed by Senator Mohammed Mohammed. The faction adopted the same September 17 date for the convention, as did Ezeoke leadership, whose NEC met September 2, and suspended Senator Mohammed Mohammed and other leaders of the faction sympathetic to Shekarau's cause.

It however, took the intervention of INEC to restore sanity in ANPP, as the commission blacklisted the two opposing groups and their transition management committees and chose to relate with the Convention Planning Committee headed by Governor Ibrahim Gaidam of Yobe State. It was therefore, INEC's position that forced the groups to work together and hold the convention, for the survival of the party.

After the disagreements were forcefully laid to rest, the issue of zoning of the chairmanship of the party came to the fore. Preparatory to the convention, a caucus meeting was conveyed at the Borno governor's lodge at Asokoro, Abuja, involving all the three governors of the party from Kano, Borno and Yobe states, leaders of the party, including former governors, Abubarkar Audu, Odgie Oyegun, Senator Kabiru Gaya, as well as all the aspirants.

Sources told Saturday Sun that it was agreed that in order not to cause disaffection among party members, each of the aspirants should be assessed, in their merits and any of them who fits into the criteria required of a new chairman of the party should be chosen by consensus. Such candidate must, it was gathered, must turn the fortune of the party, to reverse a situation where, a party which had nine governors, in 1999, currently has three.

Also the group recognised the fact that its leadership has been jumping ships at will, as it happened during the era of the late Alhaji Mahmud Waziri, who, as chairman, dumped the party for PDP, to become special adviser to Chief Olusegun Obasanjo on Manufacturing. The Caucus meeting also remembered the way Chief Don Etiebet threw in the towel as the chairman to contest governorship election in Akwa Ibom State in 2007, state under the umbrella of PDP. It therefore decided that the new national chairman of the party must be someone who would be able to hold the party and members together, add value to the party and have enough clout to woo back members who left the party as well as new members.

Again, the party leaders argued that since the chairmanship was, in 2007 zoned to the South and Chief Ume-Ezeoke spent only one term, a southerner should be allowed to complete the term. Besides, the two presidential aspirants of the party, Othman Tofa and Shekarau, are from North.

While there are capable hands among the aspirants from the North, who fits into the mould of the character canvassed by the caucus meeting, like Dr. Yusuf Musa, seen as a committed, loyal party man and whose campaign has been hinged on 3Rs (reconciliation, rehabilitation and reconstruction) has received a wide acceptance, the need to have a southerner effectively shut them out of the contest. Then the searchlight was beamed to the South, which paraded four aspirants.

Initially, there were speculations that the Chief Ume-Ezeoke was at home with the candidature of Emma Eneukwu, but it was gathered that he was under pressure from Governor Sheriff to dump him for Chief George Moghalu from Anambra State.

Eneukwu, the national publicity secretary from Enugu State, was seen as a committed party man, but not matured enough for the job, while Moghalu was considered experienced, having been a former national secretary of the party. His albatross was that he once left the party for PDP to contest Anambra governorship election.

Chief Oyegun was equally ruled out, on account of his partisanship in the crisis that rocked the party, despite the fact that he met the criteria. Chief Akande was seen as a businessman rather than a politician. Besides, the meeting reasoned that the multi-millionaire has no experience and political base, as he was never a force in political permutation of his home state, or in the South-West zone.

Eventually, the pendulum swung in the direction of Dr. Onu. It was gathered that Governor Sheriff actually brought him into the race. Onu is seen as one with the required reach, experience, being a former governor and loyal party man.

Reacting to the emergence of Onu, Akande, who refused to step down for him, to avoid an election said: 'I stand to defend the party from the tight fisted cabals bent in destroying the party for personal gain. Their action stands as a great motivation to my ambition that there are still party loyalists that will not trade their conscience at the expense of the overall interest of the party and Nigeria at large.'

Querying why Onu should be picked as consensus candidate, Akande fumed thus. 'Some cabals in the party rose from a meeting and adopted one OgbonnaYA Onu as the consensus candidates,  asking those of us that have been working for over four months to step down. We were not even sure he picked a nomination form to contest.'

Meanwhile, Akande's insistence to contest with Onu helped the party because the new Electoral Act did not give room for consensus candidate without an election. The INEC officials on ground corroborate this and at the end of the election, Akande was beaten.

Speaking to Saturday Sun on the emergence of Onu as the Chairman, Moghalu said that he stepped down because it was the collective decision of party men and women. He stated that just like the party noted, he saw in Onu a candidate who can bring the party together.

'I am also qualified and I can bring the party together, but the majority of the party leaders and stakeholders saw in him an ability to reach out to those that matter as a former governor. He is older than me. I have deep respect for him. I was a member of his cabinet when he was a governor. He can unite rather than divide,' Moghalu pointed out.

Speaking in the same direction, Dr Yusuf Musa explained that as a party man whatever decision taken in the overall interest of the party was binding.

He said: 'I had come out with the 3R message, but a closer look at the arrangements on ground necessitate that a southerner should be in charge; it was for this reason that I agree to step down. There is time for everything.'