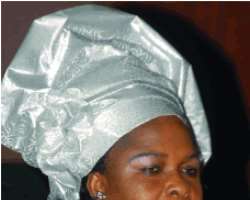 Dame Patience Jonathan
If you walk into any of the meetings of Women for Change Initiative (W4CI) and find the crÃ¨me-de-la-crÃ¨me of the Nigerian society sitting side-by-side the commoners, conversing, don't be surprised; it is a new wave, and every woman is catching the bug.

It started on July 16, 2010, when about 2,000 Nigerian women turned up in their colourful outfits at the International Conference Centre, Abuja to declare: Yes We Can, at the launch of Nigeria's Women For Change Initiative, the pet project of the First Lady, Dame Patience Jonathan.

Fifteen years after Beijing pronouncement of 35 per cent affirmative action for women, the women have realised that no threats can move the men to support them, hence the First Lady has changed tactics. Rather than demand, she is now appealing, followed by assurances that the women will remain loyal and submissive in their quest to occupy political office in the country.

The outgoing United States Ambassador to Nigeria, Robin Sanders, in highlighting the achievements of both Nigerian and African-American women, past and present, cited the efforts of Nigerian women, like Funmilayo Ransome-Kuti and Grace Alele Williams as well as those of African-American standard bearers, like Mary McLeod Bethune. She called on women to be involved in Nigeria's cornerstone and transformative 2011 election, as it is a 'must-do' for Nigeria to get it right, as regards election credibility and transparency.

Sanders said the initiative underscored the commitment of Mrs. Jonathan to work with this NGO to stop violence against women as well as work to improve the overall lives of Nigerian women in the areas of health care and education.

The US ambassador said it was wonderful to hear more than 2000 women shout, Yes We Can! on all these points during the launch, adding: 'It is time for a change and the Women for Change Initiative (WFCI) is a step in the right direction!! WFCI NGO will focus on economic development, health, education and self-help for women.'

Minister of Women Affairs and Social Development, Mrs. Josephine Anenih, said that the initiative is aimed at empowering women economically and politically and eliminating those cultural traits that have not projected women into limelight.

Already, Dame Jonathan, along with her entourage, has been visiting some states to flag off the initiative as well as begin the massive awareness campaign.

In Rivers State, she called on women to shun discriminatory practices against fellow women and unite in their quest for equitable political representation in the country. She frowned at cultural practices, which gave unjust treatment to women.

The First Lady called on Nigerian women to be united in tackling the numerous problems confronting them, emphasising the importance of women to the development of the nation.

The First Lady said the nation, as a signatory to the elimination of all forms of discrimination against women, should ensure equitable distribution of positions at all levels of government.

While decrying the poor representation of women in the nation's political environment, the president's wife called for a change of attitude as the 2011 elections draw near.

Mrs. Jonathan said: 'One of the problems confronting Nigerian women today, is marginalisation in governance. Nigerian women are not adequately represented in the three tiers of government. They are economically and socially discriminated against.

'We are here to mobilise the women of Rivers State to join their counterparts in other states to pursue this goal. Nigerian women need to come together to tackle the numerous problems confronting them and to discuss ways out of them. Nigerian women must make sure they do not discriminate against fellow women.'

Governor Amaechi's wife, Judith, said: 'I am very certain that when you envisioned this idea, you never envisaged the level of political awareness, desired commitment and willingness of the women to participate actively in politics that you will ignite in the Nigerian woman. Whenever I am privileged to appraise the activities of the Women for Change Initiative, I am so encouraged and optimistic that there is hope for Nigerian women. This effort has brought unity among women regardless of ethnic or religious inclination.

'The Women for Change Initiative has not only become a rallying point for female politicians to seek equity and justice in our political life, but has also provided a platform for tackling challenges against women's political empowerment. Thus, history will always remember you for your efforts towards actualising women's quest for fair representation.'

In Asaba, Mrs. Jonathan said, at the flag-off campaign of the Delta State chapter, that the drive for a 35 per cent target for women's involvement in governance can only be achieved through the collective interest of all Nigerian women.

She called on female politicians in the state to join forces with Mrs. Roli Sheila Uduaghan to adequately mobilise women to ensure that the people go out to register, to enable them ton vote during the forthcoming elections.

The First Lady said: 'We, the Women for Change Initiative, wish to ensure that more women play active role in politics through our campaign. We hope to have elected female governors in Nigeria in 2011 minus Delta State because, we know Uduaghan will give us what we are looking for in 2011. So, we will give him his own; take it and give us our own. We are indeed, waiting to see the state that will make history through their election of the first set of female governors in 2011.

In Imo State, Women for Change Initiative got the endorsement of the governor, Ikedi Ohakim. The governor, however, noted that his administration, from the outset, has been gender-friendly, and urged Imo women to answer the clarion call, adding that the movement was a non-political association.

Mrs. Jonathan stressed the need to give Nigerian women opportunities to play their own role in nation building. She noted that, according women opportunities to participate in nation's politics will boost their advancement and add to the nation's development. She, therefore, called on the state House of Assembly to ensure full implementation of the national 35 per cent affirmative action of women empowerment.

In Kaduna, the First Lady opined that for women to advance their rights, a comprehensive approach that could combat all obstacles, such as socio-economic and traditional beliefs, which 'hinder women equality must be taken.'

The president's wife said there was need to work 'towards placing more value on each other and be there for each other by avoiding the 'pull her down syndrome.'

According to her, women must come out in large number to vote for credible people in the forthcoming elections and must remain focused, united and build alliances in order to secure meaningful change. She assured that President Jonathan has vowed to 'see that every person's vote counts in the 2011 elections,'' and, therefore, urged women to come out en masse to participate in the electoral process.

The president's wife said women play a significant role in the development of any nation, but lamented the situation whereby women constitute only eight per cent of the population in the parliament. She said Women for Change Initiative was not out to challenge the men, but to complement their efforts, adding that without the support of their husbands, women could not achieve anything.

The Kaduna State Governor, Mr. Patrick Ibrahim Yakowa, said he was convinced Women for Change Initiative couldn't have come at a better time than now 'when there is an urgent need to mobilise, sensitise and arouse the collective conscience of the Nigerian women to the fact that the time has come for her to take mighty place in the society.''

The wife of the governor, Mrs. Amina Patrick Yakowa, gave assurance of her commitment to 'encourage, support and sensitise women to seek more elective positions' that would bring about holistic changes to all women in the state for good governance and political relevance.

In Bauchi, Dame Jonathan, during the launch of the initiative, said the programme is geared towards motivating women to be instrument of change in the society. She said the only way women can achieve better development in all facets of their lives was for them to change their attitudes. She challenged them to participate in political activities and pledged her readiness to work with them to address the challenges and problems confronting the womenfolk so as to better their well-being.

At the unveiling of the 50 Women @ 50 logo, to celebrate Nigerian women, as part of the activities marking Nigeria's Golden Jubilee anniversary, on Wednesday, at the Banquet Hall of the Presidential Villa, Mrs. Jonathan said her pet project would encourage more women to participate in politics.

She enjoined men to strongly support Nigerian women, who she has also called upon to offer themselves for elective and appointive positions.

She said: 'I urge women to offer themselves for elective positions and also appeal to our men folk to support the women. I also want to appeal to state governments to give legal backing to the National Gender Policy on Affirmative Action while I warmly commend states that have already passed it into law.'

The Women For Change Initiative is a Nigerian gender focused movement for mobilising women to take active interest in affirmation action, which is promoting women's empowerment and gender equality in the society.

Its broad objective is commitment to the creation of a movement that will engender the mass awareness of women, at all levels, to their human rights and obligations as citizens of Nigeria.

The NGO specifically wants to advance strategies for gender equality, equity and promotion of Affirmative Action principles; and mechanisms for effective resource management and accountability; develop a mechanism which could enhance the legislative processes in Nigeria, including domesticating international instruments to which Nigeria is a signatory; draw upon successful experiences as best practices or framework in other countries, such as ensuring that the constitutions and manifestos of political parties support women's participation in politics and decision-making; create an enabling environment for gender equality and women's empowerment through the review of electoral laws, tax laws, labour Act, property law, Land Use Act, Marriage Act, as well as criminal laws that continue to perpetuate discriminating traditional practices and norms; engage in the mobilisation and sensitisation of women for politics at the three tiers of government; project respectable women as role models for women political participation; promoting mentorship programmes, as a strategic tool for human development; build the skills of female politicians in the area of fund raising, public speeches, understanding of legislative procedures and practices, lobbying skills, deciding on appropriate choices, coping with stress in public office, balancing multiple roles of wife-mother-politicians (or professional career); develop women's leadership skills in every field; make the recruitment of women as a deliberate priority for constituency expansion and promote women's economic empowerment through provision of microcredit and entrepreneurship skill.

The initiative also intends to engage in the mobilisation and sensitisation of women as well as women allies towards increasing the number of women in politics at all spheres of government; lobby the legislature for the eradication of discriminatory laws and policies and advocate the review of the structure and operational guidelines of political parties, among others.