ATAOJA OF OSOGBO: THE UNTOLD STORY 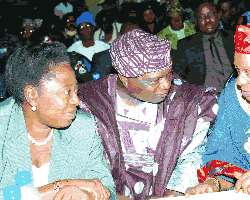 • Oyinlola and Ooni of Ife
On August 4, 2010, an era came to an end in the Ataoja traditional stool of Osogbo, the Osun State capital. Oba Iyiola Oyewale Matanmi 111 joined his ancestors after reigning for 34 years.

Since his demise, the race to fill the vacant stool commenced. Based on the Amended 2005 Osogbo Chieftaincy Declaration, five ruling houses were recognized for the Ataoja stool. They include Matanmi, Larooye, Oyipi, Lajomo and Sogbodede.

With the exit of Matanmi 111, the baton fell on Larooye Ruling House to fill the vacant throne. Consequently, the authorities of the Osogbo Local Government Council wrote the family on the need to present candidate for the Ataoja throne.

But this calculation was not left unchallenged as Sogbodede Ruling House, comprising of Gbemu and Oluode families, questioned the rationale behind the 2005 Osogbo Chieftaincy Declaration. According to the ruling house, both Matanmi and Larooye were one before the departed Ataoja decided to excise Matanmi and made it an independent ruling house.

An attempt by the aggrieved Sogbodede House to argue their case in court and obtain a court injunction against the installation of a new Ataoja, however, ran into troubled waters on Wednesday, 8 September 2010. Counsel to the family, Mr. Oluwasesan Dada, failed to move his application on the ground that he had to respond to four court processes served on him on that day by parties to the case.

Other ruling houses also queried the choice of Larooye ruling house as the next to fill the vacant stool. The court processes were still being permutated before the long Eid-Fitri holiday was declared. Descendants of one of the first settlers of the city, the Olutimehin family also cried foul. It sued the state government on the need to be included in the list of ruling houses in city as the family claimed that it has never had a shot at the Ataoja kingship since existence.

However, the situation within Larooye's family was not that better. A son of the family and member, House of Representatives, Leo Awoyemi was said to have been endorsed by the Omumuyiwa family of the Larooye ruling house.

Head of the kingmakers, who is also the Ajaguna of Osogbo, Chief Gabriel Oparanti, disclosed that 32 contenders from all the ruling houses expressed intention to occupy the Ataoja throne. The contenders were screened on the basis of age, exposure, education, carriage and acceptability before it was later pruned to six contenders. The six names, Daily Sun learnt, were later presented to Ifa Oracle where three of the contenders emerged. The lucky three were Jimoh Oyetunji, Kayode Adebisi and Leo Awoyemi.

But before this stage, allegations of corruption rent the air as a human rights activist, who is also the South-west coordinator of the Anti-Corruption Revolution (ANCOR), Mr. Amitolu Shittu, alleged that there were inducements to favour a particular candidate. He also alleged swearing to secret oath.

At a point in time, Daily Sun gathered that the kingmakers were sharply divided. But after the screening of the list to six, a serious lobby commenced. By the time the Ifa oracle picked three of the six screened contenders, other contenders resorted to litigation in order to scuttle the whole process or buy more time to enable them have a second chance. Unfortunately, they couldn't go far while the kingmakers too were undeterred by myriads of criticism trailing the selection process.

THE THREE CONTENDERS
The three Ifa anointed contenders were relatively unknown apart from Awoyemi, who is a serving member of the House of Representatives. The remaining two, Kayode Adebisi and Jimoh Oyetunji, were civil servants at the local government level. By virtue of their positions, they have limited access to funds. While Adebisi was talked about in glowing terms as regard his leadership qualities, humane disposition, managerial abilities and responsibility, he lacked the wherewithal to push himself through financially.

Daily Sun gathered that the only connection Adebisi had was by the virtue of his duty post as the Secretary to the Obokun and Oriade Council of Traditional Rulers. Apart from that, he largely depended on goodwill and his personal virtues. Same would have applied to Oyetunji but for the way his emergency came. It was alleged that the moment Awoyemi declared interest in the throne, PDP chieftain, Tajudeen Oladipo, threw his weight behind Oyetunji, who, it was learnt, came from the same compound as Awoyemi. Awoyemi was supported by Alhaji Tunde Badmus, the Asiwaju Musulumi of Yorubaland, a leading light of Osogbo and the Proprietor of Tuns Farm Limited.

This underlining factor was best captured by Oladipo himself when confronted on Amitolu's allegation: 'But what offence has anybody committed if he uses his money to back up a candidate for the throne, so far he is not using government money or a stolen fund? If I have my money and someone seeks for my assistance and I am willing to assist such person, don't I have the right to do so?

'Then, I am a stakeholder of this city. If there is anything going on in Osogbo, don't I have the right to be informed? And if it is an issue I am interested in, what stops me from getting involved? I want to know which laws says I should not be interested or support a candidate of my choice. 'But I am not involved because one, I don't have the money for such undertaking. Two, there is no way you will not spend money for contest of this kind and in most cases, the contenders borrow money for such contest or muster funds from their friends and family.

'But let us have another look at the whole situation. In what way has Amitolu's right being breached in all these allegations he was making? Is he a prince, a contestant or one of the kingmakers? He is none of these. So, in what way has his right been breached? You (journalists) should let him know his limitations and stop him from seeking cheap popularity.'

THE SCHEMINGS
Series of nocturnal meetings were held by the two warring camps while Daily Sun learnt that at a point in time the elite in the town and the Osogbo Council of Elders were divided along Tuns and Oladipo's camps.