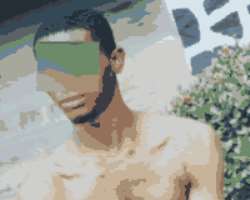 • Udo Mbakara
You might not believe this, but it's true. In a desperate bid to become rich, a young man in Calabar, popularly known as Udo Mbakara, has sliced off the heads of two young girls who are his nieces.

Mbakara, 28, told police detectives in the Cross River State capital that he beheaded his two young nieces so that he could sell the heads. Each of the head, he said, was to be sold for one million naira.

The suspect lives with his mother, his younger brother and two nieces at 65, Edim Otop in Calabar. His elder sister and mother of his nieces is said to live in Lagos. The sister only comes from time to time to visit.

Narrating the incident at the police station where he is being detained pending his arraignment, Mbakara said: 'On that fateful Saturday morning at about 9 am, Princess, aged nine and Rachel, aged six, were all at home when I offered to cook rice for them. But unknown to the children, I had drugged the food and did not allow my own younger brother to eat the food.

Investigations by Daily Sun revealed that Mbakara, who has since refused to disclose the proposed buyer of the sliced heads, might not be a first offender. Many people believe he has for long been in the business of selling human heads to ritualists within the Calabar metropolis.

'It is even rumoured that he's behind the sudden disappearances of most of the missing children in the town, and that he has been fronting for those in the business. It was also gathered that his elder brother is serving a jail term in the Afokang Prison for rape,' a resident told Daily Sun. Police sources said that in the last three months, the command has received reports of missing children and has even gone on air to announce the particulars of some of them.

A family source confided in this newspaper that it was Udo Mbakara's younger brother that raised the alarm on what the suspect was doing inside the room. According the source, who pleaded anonymity 'due to family considerations,' the younger Udo claimed that he heard the children screaming inside. The source continued: 'So he went and peeped and saw his elder brother mopping blood on the floor.

His entire body was also very bloody. At the gory sight, he rushed out and informed neighbours that there was something going on in the house and the girls were screaming. At that moment, some neighbours went in to see what was going on. They then alerted men of the Airport Police Station who responded promptly and arrested Udo Mbakara.'

At the children's school, the headmistress, Mrs. Rosa Samuel Edo, described them as very brilliant, saying it was a pity that the school has lost them. According to her, it was as if the unlucky children had known that something would go wrong, noting that they both developed fever on Thursday and Friday. Princess' class teacher, who would not disclose his name, was crying profusely when Daily Sun sought to speak with him. He said he was close to the girl who he described as 'very brilliant.'

Mbakara, who is presently being interrogated at the homicide department of the state police Command, Diamond Hill in Calabar, would soon be charged to court. http://www.nigerianbestforum.com/blog/wp-content/uploads/2010/09/banner-sept-24-10.gif