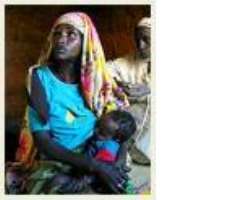 Aishat Umar from Lafia-Lamurde in the northeastern state of Adamawa, Nigeria, had her first child at age 16. By age 33 she was pregnant for the ninth time in a quest to deliver a prized male child, but following 36 hours of labour she bled to death, at home.

None of Umar's nine children was delivered in the presence of a medical professional.

Umar's experience is common in Nigeria, where just 35 percent of births are attended by a skilled health professional, and one in 18 women dies in pregnancy or childbirth, according to World Health Organization (WHO) and UN Children's Fund (UNICEF) statistics.

The statistics have changed little over the past decade.

Half of Nigeria's maternal deaths are due to postpartum hemorrhaging, which unskilled health workers lack the know-how or equipment to stop, said maternal health expert, Dr. Arabi Tukur of Yola, 473km northeast of the capital Abuja.

With an average of 5.5 births per woman, West Africa has the world's highest fertility rates, which puts women at greater risk of dying in birth, according to UNICEF.

"If a woman has more than four children, the fifth pregnancy can be more dangerous than the other pregnancies put together," said Dr. Ejike Oji, a gynecologist with the reproductive health NGO IPAS. Starting young also increases mortality, he said.

Many Nigerian women, particularly in the conservative north, give birth in their teenage years. But reducing early pregnancy can be tough given women's disadvantaged social position, according to UNICEF's latest State of the World's Children report.

In Kano state many men do not allow their wives to have a doctor present during childbirth. "I don't think it is proper for a male doctor to attend to my wife, not to talk of assisting her during delivery," Hassan Kurfi, 48, a farmer in the village of Nassarawa, in Kano state, told IRIN.

"In our tradition, culture and religion, we do not encourage close contact between men and women [who are not related]; especially for unmarried women.I would rather have a female traditional birth attendant attend to her."

"Even my wife is not comfortable with having a male doctor around her when she is delivering a baby," he added.

More needs to be done to break down these cultural barriers, said Kirrin Gill, maternal health expert at the International Center for Research on Women. "Change must be community-led, so we need to do more work with community members to get them on board."

Only with combined pressure from within the community and from the government, will change gain momentum, she said.

The strategy has faced delays because health systems are lacking, Health Minister Babatunde Osotomehin told IRIN. "It is not about the buildings - the hospitals or the clinics - it's about [health] structures that we need to put in place. The government is not happy with the current situation and will soon issue comprehensive plans on how to tackle it."

One of the challenges facing the government, according to Gill, is the decentralized control of health services, which makes it difficult to implement national strategies in the states.

She noted that the federal government pledged to allocate 15 percent of its overall budget on health in its 2008 budget launch, but since then has only committed 5 percent.