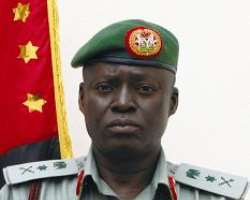 The former COAS died in a London hospital Tuesday morning after a brief illness.

Already, said Brig Gen Olukolade, “the Chief has set up a team of senior officers to work out plans for a befitting receipt of the body and burial. The panel is to work closely with the family of the late Chief. And the panel is also working out the details of reception of the body with the Defence Adviser of the place where he (Gen Yusuf) died.”

The late Gen Yusuf was commissioned into the Nigerian Army Artillery Corps in 1975 and was a member of the Nigerian Defence Academy (NDA) Course 14.

He was a Nigerian Contingent (NIGCOM) Commander under the UNAMSIL before being appointed the Chief of Staff of the Liberian Armed Forces.

Already, a condolence register has been opened for sympathisers at the Nigerian Army Headquarters Abuja.

Yusuf, while delivering his valedictory speech in September last year said he was a fulfilled man, contrary to insinuations that he was hurt by the retirement that swept the Service chiefs, except the incumbent Chief of Defence Staff (CDS), Air Chief Marshal Paul Dike

His words "I am a fulfilled man, we have been able to achieve monumental feats because, compared to the last 30 years, the difference in the last one year has been immense. We set the Army on a transformation path, we beefed up training, Eagle Ex-Ring 1V 2007 and NADCEL 2008 is an attestation to this fact. In addition to several unit level trainings, preparations are currently on for others now. My appeal, however, is that maintenance of our equipment should not be compromised.''

To drive home his point he said "we were 101 that got admission to NDA in 1973; only 67 came through two years later, today, 28th of August 2008, I am the last man standing among the 15th Regular Course. I am an extremely fulfilled man, among uncountable opportunities God put my ways, I am proud to have tasted battle and commanded the Nigerian Army, the pride of every soldier".

Yusuf was very particular about the welfare of his men, "Never in the history of the Army has barracks been renovated enblock as five barracks are slated for renovation, meaning that in four years, all Army barracks in the country would have been renovated. We also made sure that our troops on peace support operations get their full allowances as stipulated by the United Nations. It has never happened before".

He also launched the Barracks Youth Foundation, for the upliftment of the teeming youngsters in the barracks to underscore the importance that idea.

The transformation of the Army was also cherished by the deceased officer and he put so much energy into the realisation of that dream.

Late Gen Ejeh, who was a Fellow of the Royal college of Obstetrics and Gynaecology, hailed from Ogbadibo Local Government of Benue State.