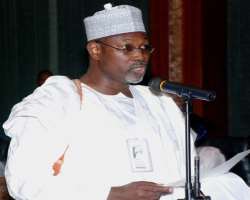 
San Francisco, Sept 19, (THEWILL) – The Independent National Electoral Commission (INEC) today said it has requested more time to conduct the 2011 general elections explaining that it could not deliver credible polls within the timeline given the commission.

In a communiqué issued in Calabar and signed by its Secretary, Abdullahi Kaugaima after its two-day retreat, the commission said it would "endeavour to engage all the relevant stakeholders with a view to exploring all legal avenues for extension of time…"

The INEC communiqué in full:

In furtherance of its objective of ensuring free, fair and credible elections, recognising the need to subject its internal structures, processes and plans to close scrutiny; desirous of carrying along all its personnel in the discharge of the onerous responsibility and conscious of its responsibilities and obligations as an election management body, the Independent National Electoral Commission (INEC) with the support of International Foundation for Election Systems (IFES) organised a two (2) day retreat for National Commissioners and Resident Electoral Commissioners (RECs) at the Amber Hotel, Tinapa, Calabar between 16th and 19th of September 2010.

Having extensively and critically deliberated on the internal processes and external dimensions affecting the whole electoral process; and in particular the upcoming Voter Registration exercise and the General Elections in 2011, the Commission observes as follows:

1. That the task of conducting free, fair and credible elections in 2011 is a collective task for all Nigerians and not the Commission alone. Therefore, the Commission reiterates its commitment to free and fair conduct of elections and calls on all Stakeholders to join in the task of achieving this objective.

2. That there is the need to severely punish electoral offenders to serve as deterrent to others. Therefore, INEC calls on the National Assembly to enact a law for the establishment of an Electoral Offences Tribunal.

3. Having examined the Commission’s detailed Action Plan for the voter registration and elections, the Retreat noted that the timeline for the implementation of this Plan is very tight. Consequently, the Commission shall endeavour to engage all the relevant stakeholders with a view to exploring all legal avenues for extension of time to enable the Commission to deliver on the aspirations of Nigerians for a credible voters’ register and free, fair and credible elections. Should this happen, May 29 2011 inauguration date must remain sacrosanct.

4. Political Parties should strictly adhere to provisions of the Electoral Act 2010 and their Constitutions in the conduct of their congresses, conventions and primaries. The Commission shall ensure strict compliance to such provisions.

5. The Commission has developed an in-house software which will be rigorously field-tested before the commencement of the registration exercise.

6. The Commission calls upon all Stakeholders to ensure that incidences of underaged registration and other abnormalities are detected and prevented during the registration and display of Voters’ Register.

7. The Commission expresses its profound appreciation to all Nigerians for their expressions of goodwill, support and cooperation, which has inspired it to continue to give its best to the success of the upcoming Voters’ Registration and Elections.

Gusau submitted his letter of resignation to President Goodluck Jonathan on Thursday and informed Jonathan of his intention to run on Friday.

Adebisi Adekunle, Gusau spokesman confirmed his resignation saying, "I can confirm to you that the national security adviser has resigned."

THEWILL gathered that Gusau resignation and security concerns forced Jonathan to reconsider his planned travel to New York to attend the United Nations General Assembly. As at the time of going to press, it was unclear whether the president would make the journey.