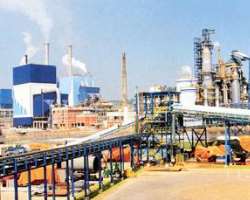 A cement plant
The Federal Government's recent decision to grant six Nigerian cement manufacturing companies the right to import 2.5 million metric tonnes of bulk cement to augment local production till the end of the year has attracted criticisms from some importers, who insist that the importation process should be liberalised. But local manufacturers, citing the need for investment growth and industrialisation as reasons, say genuine means of meeting national cement need lies only in local production. LAYI ADELOYE writes on the real issues involved in the cement imbroglio

In the last few weeks, controversy seems to have been the second name of the cement industry in Nigeria. Of course, the recent decision by the Federal Government, through a circular by the Minister of Finance, Mr. Olusegun Aganga, which was dated July 20, and addressed to the Nigerian Customs Service and other relevant agencies to approve the importation of 2.5million metric tonnes of bulk cement by six local manufacturers to cover shortfalls in cement supply for the second half of the year, brought some brewing issues in the sector to the fore.

Before the memo, there had been controversies over the reversal of some import and production policies. The late Umaru Yar'Adua's administration was believed by local manufacturers to have been arm-twisted by some powerful cement importers into reversing the backward integration policy put in place by the Olusegun Obasanjo administration.

The latest campaign by this group came in the guise of having building and construction industry operators describing the new cement policy as a way of putting the destiny of the people in the hands of a cement cartel. But the local manufacturing firms that were granted the leverage, on the other hand, have generally described the government's move as a support for the promotion of growth of local industries and investment.

No doubt, after petroleum products, cement occupies the next line as the most controversial product in Nigeria. The story of cement crisis in Nigeria has been one of paradox. This is so because the problems associated with its supply and demand are a kind of paradox. It is paradoxical that with the country's immense endowment in raw materials needed to make cement, the country can still be talking about importation in at the moment. The country, according to seismic and metallurgical surveys, is adequately endowed, naturally, to be a leading producer of cement globally, yet the sector has been through one crisis or the other, all in the name of meeting the nation's cement need.

Available facts form findings posit that Nigeria has 95 per cent of cement raw materials that can be tapped to grow the nation's economy and export the commodity to other countries.

The real areas of controversy have to do with the issues of supply and demand. The question is: what is it in this cement thing that has made the resolution of matching supply and demand at affordable prices difficult? Why does the nation still need to import cement after 40 years of production in the country? Why would some people think that investing in local manufacturing is not necessary but to depend solely on importation for shortfalls?

In terms of potential, Nigeria has some cutting edge resources, which should naturally aid its positioning as a world leading producer of cement. In the first, the main raw materials needed in cement manufacturing are abundantly available, dotting over 70 per cent of Nigeria's landscape, according to Cement Manufacturers Association of Nigeria. Limestone, which constitutes over 85 per cent of the inputs in cement manufacturing, for example, is cheaply available. Besides, other inputs, like red alluvium, shale and gypsum, according to the Nigerian Raw Materials Research and Development Council, are very much in abundance. Industry research reveals that with the exception of gypsum, which occurs in thin-vein layers, Nigeria is abundantly endowed with all other inputs. For example, limestone, the research reveals, is found in all the six geopolitical zones of the country. Aside from the basic Raw materials inputs, the other major requirement for cement production is fuel. Again, the nation is rich in all sources of energy, including oil, gas and even other alternative fuel (waste).

Another important area of the cement paradox is Nigeria's population, which naturally presents a huge market for cement. Given the country's level of development, it is expected that Nigeria's cement consumption will keep growing for a long time to come. In the whole of West Africa currently, only Nigeria has serious cement manufacturing facilities. The implication is that if the government would properly harness the country's capabilities and optimally tap into the comparative advantage prospect in the production of this critical product, Nigeria will not only become self sufficient, but will soon become a net exporter of the product, particularly to the West African sub-region.

Of course, every successive administration in the country appeared to have expressed concern about the inability of the nation to fully realise its potential in cement production. This is another aspect of the paradox. Some of the administrations did make genuine efforts to formulate policies that could take the country out of the bondage of dependency on imports in terms of meeting its cement needs. But such policies were usually not followed through to the point of yielding the desired result before they were upturned, most often, to satisfy powerful interests. If the potential is there in terms of natural endowments, productivity and marketing, and the successive administrations have all had enough appreciation of the prospects, what then could have been retarding the nation's quest for great strides in cement manufacturing? Why is Nigeria still being made a dumping ground for imported cement? Of course, answers to these questions are all wrapped in some other questions. For instance, Do Nigerian cement manufacturers actually have the needed capacity to meet local demand? How can the sector be encouraged to bridge the gap between demand, price affordability and supply without resulting into large scale importation? And what should be the right incentive from the government if Nigeria is to attain its potential in cement manufacturing and supply, and thereby present a competitive posture to a country like China?

The Federal Government, under the administration of Chief Olusegun Obasanjo, in 2002, appeared to understand this complex scenario and the intrigues shaping policies on cement. Although it appreciated the enormity and dimensions of the problems involved, the administration believed that providing solutions to such a large scale complexity would take a careful segmentation. While it decided to tackle the problem headlong with its backward integration policy, the administration decided to space out its implementation. Of course, sector analysts believe that the decision by the government to adopt the policy might have been informed by the obvious lapses in infrastructure and energy requirements in the country.

Specifically, the policy required that cement import licences be allocated only to importers with proof of building factories for local cement manufacturing in Nigeria. A period of three years was given to all players in the industry to comply. Following the introduction of the policy, various traditional cement importers began to invest heavily in manufacturing, by starting to build new cement plants in various locations.

Within the first six years of the policy, no less than eleven million metric tonnes had been added to their capacity.

Apart from the completed projects, some other projects under construction between 2008 and 2010 in the industry in pursuit of meeting the local demand mandate, according to CMAN, include WAPCO's $600million two-million metric-tonne-capacity new plant at Ewekoro; Dangote's $1.2bn Ibese plant's six million metric-tonne capacity; Ava Cement's 300,000 metric tonne factory in Edo State and BCC's $200 million one-million metric-tonne expansion project. With a total investment of $3bn, the new plants are expected to take local productive capacity to 14.3 milllion metric tonnes annually. With local cement demand put at 10 million metric tonnes as at 2008, addition of this figure to the existing capacities would definitely ensure local cement productive capacity outpace demand by 2011.

However, in spite of the government's perceived commitment to this ideal and the local manufacturers' determination to take up the challenge, he said the usual albatross of the industrial sector in Nigeria appeared. The new administration, under the immediate past President, the late Alhaji Musa Yar'Adua, decided to change the policy. The backward integration policy was reversed. In the last two years, a free for all importation policy on bulk cement, crafted by the then Minister of Commerce and Industry, Mr. Charles Ugwu, did not only succeeded in putting the massive investments in the sector in jeopardy, but failed to bring down the prices of bagged cement in the country. But for the effect of the global slur in construction activities, which snow-balled in the sector's depression in Nigeria, a 50-kilogramme bag of cement's price could have been hovering above N2,000.

This is happening despite the fact that speculators with no known evidence of manufacturing plant or intensions were issued import licences - a situation akin to the great Cement Amanda of the 1980s. Since then, floating packing ships from China and other developing Asian countries have been allowed to come and dump cement in Nigeria, with little or no value addition to the nation's economy.

Analysts are worried about this trend, especially on the nation's industrial and economic future. In the first instance, the policy of liberalised cement import regime appears to have compromised Nigeria's industrial development, as it seems to have shifted focus away from the major problems of industrial operations in Nigeria. Besides, it appears laden with a discouraging bend as local manufacturers are already confused over the fate of the old and new investments in the sector. The implication is that while new investors may be sacred from venturing into the sector, despite the nation's comparative advantage, old investments are the risk of failing.

According to Makoju a major plant in the industrial revival remains the resuscitation of the nation's infrastructure and the energy sector. Therefore, the new administration of Dr. Goodluck Jonathan was right in his avowed duty to look dispassionately into the circumstances surrounding the whole gamut of cement production, sales and its economic import to the nation's economy. 'Going back to the policy, with clear mandates to operators to deliver on promises of meeting national demand by 2011 (with marginal allowance for a controlled supplementary imports in the meantime) as well as ensuring a pocket-friendly sales regime for cement in Nigeria, are the cardinal issues, which the government has been trying to address,' Makoju said.