PDP Divided Over Order Of Primaries, Set Fees For Aspirants 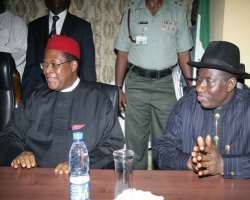 THEWILL gathered that the working committee of the party met for several hours on Monday and Tuesday to work out the guidelines which the National Executive Committee (NEC) of the party is billed to ratify on Wednesday at its emergency meeting.

Sources familiar with events at the meeting told THEWILL that NWC was stuck on the order of the conduct of the primaries as most PDP governors have lobbied desperately to have the governorship primaries hold before the presidential primaries, but the president’s camp seem to be uncomfortable with the move fearing that some governors may abandon the president after they secure their nomination.

The governors at an earlier meeting with President Goodluck Jonathan had pressed him to allow the governorship primaries hold before the presidential.

It is still unclear if the governors have had their way on the very contentious issue.

The fees would be ratified on Wednesday when the NEC meets at noon.

Meanwhile there are speculations that the National Executive Committee will at its Wednesday meeting grant former vice president and presidential aspirant of the party, Alhaji Atiku Abubakar a waiver to allow him contest for the party’s presidential primaries. Atiku had applied for a waiver a few weeks ago having recently returned to the party.