ECOLOGICAL UNDERSTANDING OF MOSQUITOES ‘MUST CATCH UP’ 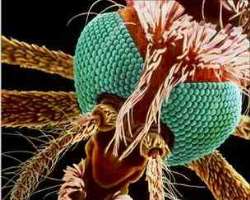 One species, Anopheles gambiae, is responsible for the vast majority of malaria cases in Africa

We need to learn more about the ecology of malaria-spreading mosquitoes to capitalise on molecular biology's recent advances, a top scientist says.

Evidence of insects becoming resistant to current treatments meant new methods had to be explored, he said.

But it required getting “into the field” to investigate the mosquitoes' ecology, he added.

Professor Godfray, from the Department of Zoology at the University of Oxford, made the comments during a speech at the Society's annual meeting in Leeds.

“The general point I was making was that we have a number of really effective interventions that can reduce the burden of malaria today,” he told BBC News.

“For example, using bed nets and spraying inside houses, and also attacking the malaria pathogen itself, such as using new drugs.

“But in both cases, there is a great worry about resistance and we have examples of insecticide and drug resistance already in Africa, so there is a feeling that we need to have further interventions up our sleeves.”

Breakthrough hope
According to the World Health Organization (WHO), half of the world's population is at risk of malaria, and about 243 million cases led to an estimated 863 000 deaths in 2008, most of which where children in Africa.

Malaria-proof mosquito engineered
Q&A: Malaria
Malaria is caused by Plasmodium parasites. The parasites are spread to people through the bites of infected Anopheles mosquitoes, called “malaria vectors”, which bite mainly between dusk and dawn.

It is female mosquitoes that transmit malaria, as they feed on human blood, which they need to make their eggs.

Professor Godfray highlighted some of the novel methods of intervention that were being explored by researchers at the moment.

“We now have ways of making mosquitoes refractory to carrying malaria, but the problem is how to spread these and other beneficial genes through wild mosquito populations – we need what are called genetic drive mechanisms.”

One is a project based at Imperial College London, headed by Professor Austin Burt, which is looking at how genes called homing endonuclease (HEG) can be used to manipulate Anopheles gambiae.

The so-called “parasitic” or “selfish” genes can spread rapidly through mosquito populations even if they harm the host insect, giving HEGs the potential to introduce traits, such as sterility or an inability to transmit disease.

“Another project, which is being done largely out of the University of Queensland, in Australia – is led by Professor Scott O'Neill,” said Professor Godfray.

“It is using a symbiotic bacteria that has a number of effects on the mosquito, interfering with its capacity to transmit viral diseases.

“It is also life-shortening, as it is very interesting that only a very small fraction of the mosquitoes live long enough to transmit diseases.

“So if you can just reduce the [lifespan], you can have a disproportionate effect on disease transmission.”

'No magic bullet'
Professor Godfray went on to say that he thought the days when people held out hope that there would be a “magic bullet” to rid the world of malaria were gone.

One existing control method is to fumigate areas with insecticides

Nowadays, he added, it was a matter of pursuing “integrated vector and disease control” in which a number of different of approaches where used in conjunction with one another.

“In order to do that, you need to understand the full population biology of the system,” he observed.

“If you are trying to control the vector, and to a certain extent the disease, then it is an exercise in applied ecology, and you need to think as much about the ecology as you do about the molecular biology.”

In Africa, the vast majority of malaria cases are transmitted by the Anopheles gambiae species and Professor Godfray said that there was still a lot to learn about the complex creature.

“We know they filter-feed on micro-organisms but we don't know what they like to eat the best.

“We know very little about the community ecology… and this is significant because if you were to knock it out then you want to know what would take its place.

“And we don't know enough, not for the want of trying, about the dispersal of the mosquitoes; how they move from one place to another.”

He argued that a lot of pioneering and “wonderful work” had been done on the molecular and genetic side, and that the ecology side had to catch up.

“If it does not catch up, that is going to limit our ability to apply the molecular and genetic work,” he warned.

In order for the two sides to become balanced, it was necessary to attract more ecologists into this field of research, Professor Godfray suggested, adding: “I'm afraid it boils down to resources.”

At a time when the UK government is carrying out a wide ranging review of how public money is spent, the scientific community is not being spared.

Recently, Business Secretary Vince Cable used a speech to outline a plan for cuts to scientific research, saying: “there is no justification for taxpayers' money being used to support research which is neither commercially useful nor theoretically outstanding”.

He added: “Much of what science does is for the public good: wealth creation, quality of life, etc – it is an investment in the future.

“It is trying to produce the knowledge and the skills to be an economically successful country and to address the huge challenges that face the globe.

“So, as many scientists are saying at the moment, you should be very careful about how you reduce funding in this area.”