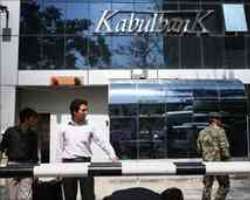 Afghanistan's central bank has stepped in to take control of the troubled Kabul Bank.

Central bank chief Abdul Qadir Fitrat said investigations had also been started into the dealings of the bank's top two directors and shareholders.

Customers have been withdrawing money from the bank amid fears it may collapse following allegations of corruption and mismanagement.

'Every penny accounted for'
President Karzai's brother Mahmoud Karzai is one of the bank's largest shareholders.

A senior official close to the president said the action was being taken to safeguard the nation's financial system.

The bank, Afghanistan's top private financial institution, is responsible for paying the salaries of 250,000 government workers.

The New York Times and the Wall Street Journal have reported that the bank has run up debts of about $300m (£194m).

Mahmoud Karzai was not thought to be involved in the property freeze because he does not have property registered in his name.

But a spokesman told the Reuters news agency last week that Mohammad Haseen, the brother of First Vice President Mohammad Qasim Fahim, was among the shareholders.

The central bank had previously said that it would back Kabul Bank, and was willing to offer it loans if requested.