HOME TROUBLE FOR JONATHAN, WE WILL PROTECT HIM â€“ TOMPOLO 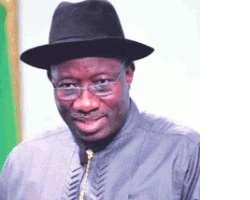 By Daniel Alabrah
With preparations for party primaries getting into high gear, support for President Goodluck Jonathan's bid to pick the presidential ticket of the Peoples Democratic Party (PDP) is dangerously flagging, curiously, in the South South.

Feelers from the region indicate that the President might just be walking a tight rope as a combination of forces is threatening to scuttle his ambition to remain in Aso Rock beyond 2011.

This is in spite of the fact that he has to contend in the region with the challenge from the duo of ex-military president, General Ibrahim Babangida, and former Vice President Atiku Abubakar, for the PDP ticket.

By the provision of the Electoral Act 2010, which prescribes staggered primaries, parties shall hold special conventions in each of the 36 states of the federation and the FCT, where delegates shall vote for each of the presidential aspirants at designated centres.

According to Section 87(a), 'the aspirant with the highest number of votes at the end of voting in the 36 states of the federation and FCT shall be declared the winner of the presidential primaries of the political party.'

This has made the governors the beautiful bride to presidential aspirants.

Governors' hurdle
A formidable obstacle to the Jonathan-for-President project, however, remains the prevarication of the Peoples Democratic Party (PDP) governors. While majority of the party's 28 state governors present a public impression that they are with the President, Sunday Sun learnt on good authority that they are actually working surreptitiously toward backing two of their own for the president and vice president slots. The Kwara State Governor, Dr Bukola Saraki, his Gombe counterpart, Danjuma Gombe, and a South South governor are already being touted to slug it out with Jonathan for the party's presidential ticket at the primaries.

As politicking gets to the crunch, the picture in the President's home region yet remains hazy as feelers indicate that he is battling to get a firm commitment from four of the South South governors.

While he can count on the support of the Akwa Ibom State Governor, Godswill Akpabio, and his Cross River counterpart, Liyel Imoke, whom he has picked as campaign coordinator, the same cannot be said of the other governors in the region.

All the governors belong to the PDP except for Adams Oshiomhole of Edo, who is of the Action Congress of Nigeria (ACN),

In the last two weeks, Sunday Sun learnt that Jonathan has sent emissaries to the governors perceived to be still sitting on the fence to enlist their support.

An aide to one of the South South governors confirmed this when he was contacted on the telephone but declined being quoted.

He however said there was nothing wrong in the President wooing the governors as 'politics is about give and take.'

Sunday Sun also gathered that Jonathan's foot soldiers in the region might be unwittingly hurting his chances with the way they have treated some of the governors.

The Delta State Governor, Dr Emmanuel Uduaghan, was reportedly kept in the dark when a pro-Jonathan rally held in Warri last week.

The event planned by one of Uduaghan's critics, Chief Edwin Clark, a former Information Minister, reportedly had presidential backing and attracted a Minister, National Assembly members and other prominent Nigerians.

The governor was said to have been shocked to learn of the rally hours before it was held and reportedly gave orders that the Warri Township Stadium venue be shut. The event was later shifted to an open field in Effurun at the last minute.

Uduaghan, however, insists there is no thaw in his relationship with the President.

The situation in the President's home state of Bayelsa also presents a potentially interesting scenario.

Governor Timipre Sylva is said to be growing grey hair over the cold treatment from Jonathan to his re-election bid  while he also battles to fend off the formidable opposition from an array of prominent politicians from the state based in Abuja.

Efforts made by Sylva to curry Jonathan's support so far have reportedly failed, with the President said to favour a Minister in his cabinet or a veteran politician in the state to replace the embattled governor.

One of the implications of this scenario is that if Sylva is unable to resolve his political differences with Jonathan before the PDP primaries kick off, there might be protest vote by delegates, who are expected to be Sylva's loyalists, against the President in his home state.

A tricky situation may also occur in Rivers where the former governor, Dr Peter Odili, is said to have teamed up with General Ibrahim Babangida. Sources say Odili may emerge as IBB's running mate if the latter picks the PDP ticket.

It was gathered that before Odili struck a deal with IBB, he had approached the Jonathan camp but was ignored. Sunday Sun learnt that the former governor could not see the President even when he had appointment with him at Aso Rock.

An aide to Odili, who confirmed this in a telephone interview but asked not to be named, said the former governor needed to be relevant politically and that politics is about interest.

'What is wrong in Odili aligning with IBB? After all they are politicians and politics has to do with interests. Odili still has a lot to offer this country that he cannot be ignored. So there is nothing wrong with him trying to be relevant politically,' the aide said.

Loyalists of the former governor have been having a running battle with the incumbent Rivers governor, Chibuike Amaechi, over control of the state PDP in the last few months.

About 12 members of a faction reportedly loyal to Odili were last month arrested at a meeting and later charged with illegal assembly by the police in the state.

Conflicting signals from ex-militants
Former militant leader, Government Ekpemupolo aka Tompolo has, however, said Jonathan would be the man to beat once he declares his intention to run for the presidency.

He assured that the ex-militant leaders would back the President and ensure he wins overwhelmingly in the Niger Delta.

Tompolo, who broke his silence on the Jonathan presidency bid in a telephone interview by his spokesperson, Paul Bebenimibo, said: 'Jonathan is a product of the agitation of the former militants and we cannot abandon him now.

'We fought to end the marginalization of the Niger Delta in the scheme of things in Nigeria and since God has placed President Jonathan there at the moment, we will protect his interest and that of the region.'

Tompolo admitted that there were still pockets of angry former militants, but said 'everything and everyone cannot be taken care of at the same time.

'Some people would benefit now while others would later. So we have to be patient with the President. I am sure he knows what our region wants and with time I believe these issues would be addressed,' he said.

Another ex-militant leader however faulted Tompolo, querying what he would use to 'protect Jonathan if violence breaks out again in the creeks.'

According to the former Movement for the Emancipation of the Niger Delta (MEND) commander, who also spoke to Sunday Sun on the telephone, Jonathan, as former vice president, has been a part of the late Umaru Yar'Adua administration and that the government cannot continue to ask for time to tackle the developmental needs of the Niger Delta.

'This government has been in power for almost four years and what has the Niger Delta benefited by way of development? Since they have decided to ignore us after surrendering our arms, in 2011 we will also decide to support whoever we want,' he said.